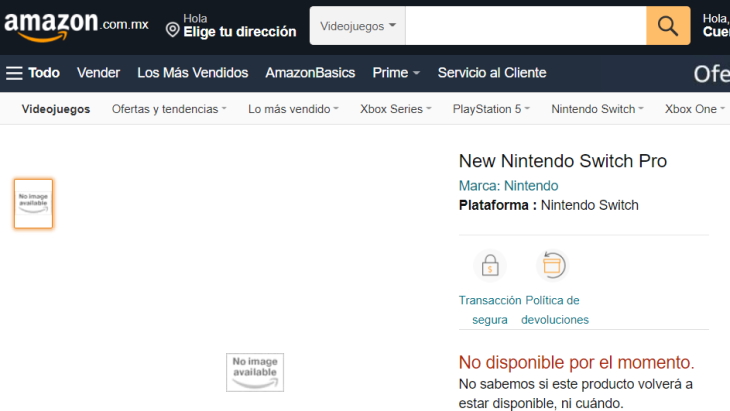 Amazon Mexico has leaked a listing for “New Nintendo Switch Pro” all but confirming the rumors, and suggesting an announcement is imminent.

Comicbook.com and multiple Twitter users [1, 2, 3] discovered the listing, which currently re-directs to an error page with dogs (the breed changes every time you reload the page). The archived listing (as linked above) provides no other information other than the listing title.

While Amazon France had erroneously listed multiple PlayStation 4 titles coming to Windows PC in April 2020 (months before PlayStation Studios launched on Steam), the swiftness of the listing being taken down, and other information on the leaks would point to it the Nintendo Switch Pro being real, and announced soon.

We previously reported on rumors (including from Bloomberg) of a more powerful Nintendo Switch being in production, a so-called “Nintendo Switch Pro” model. This new model will allegedly support 4K graphics (via a new NVidia graphics chip and 7″ screen), and would allegedly launch early 2021. A patent for a rail-less Joy-Con further fueled speculation.

Bloomberg and Eurogamer sources recently claimed the console may launch September or October 2021, with an announcement prior to E3 2021. This would enable third-parties to show off their games freely, as Nintendo’s own digital showcase would be later during the E3 2021 week.

Nintendo President Shuntaro Furukawa denied the initial claims, amid Nintendo’s best financial quarter since 2018. Nintendo’s recent successes have no doubt been thanks to the Nintendo Switch.

It sold over 85 million units as of May 2021; fueled by the increased interest in gaming thanks to the coronavirus pandemic quarantine lockdowns, along with the cheaper price and greater availability compared to the PlayStation 5 and Xbox Series X.

While selling a new version of something that is already selling well would seem illogical (especially when a scarcity of parts has caused issues for PlayStation and Microsoft), Ace Research Institute analyst Hideki Yasuda claims that new hardware would be key for Nintendo in 2021. Pa egzanp, new hardware could tempt those who had not yet bought a Nintendo Switch.

He cited the success of the Game Boy, Pletasyon 2, and Nintendo DS; while the Wii and PlayStation 4 had no or practically no variations, and experienced a sharp drops in sales in the latter half of their respective launch years. Yasuda also claimed Nintendo has an “oligopoly” in Japan, while PlayStation game sales have been practically “eradicated.“