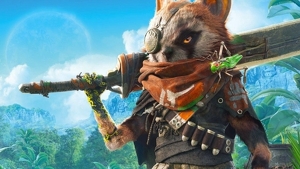 For the longest time, Biomutant has been my white whale. Like clockwork, a life sign would emerge, with the announcement that yes, it’s coming, definitely, just not right now. In part, this is due to developer Experiment 101 having been granted an unusual amount of freedom by their publisher to keep adding stuff, which led to a game that always sounds like a lot on paper – a character customisable down to their genetic makeup who can wield any weapon, a crafting system allowing you to make virtually anything, a morality system, a map dwarfing even Skyrim’s. It’s full of superlatives any marketer would love, confident in selling itself as something you’ve never seen before. Trouble is, you absolutely have.

To be fair, you’ve never controlled a character quite like this. The protagonist here is a mutant, a furry being reminiscent of a cat, or maybe more of a rodent, depending on which visual you’re going with during character creation. You and others of your species are adept in the art of kung-fu, but you can also wield giant swords, guns, rocket launchers and karate weapons such as bo staves, sai blades and more. You can pick up any weapon regardless of your character class, which makes the classes superfluous – you can even find multiple ways to learn the starting perks each class comes with even if you chose another.

To understand other areas in which Biomutant can’t live up to the expectations it set itself, it’s important to remember this is a game made by a team of just 20. You see it in the way copies of environments exist around the map, how some animations had to be foregone, how text repeats with certain actions.