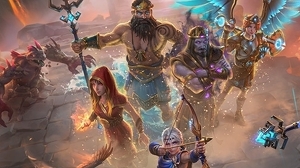 The Lost Gods, as the story DLC is known, follows the adventures of new protagonist Ash, who travels to Pyrite Island in order to gather up the deities – including Poseidon and Hades – that fled Olympos around the start of the main game. All going well, they’ll return to the Pantheon and help restore balance of the world.