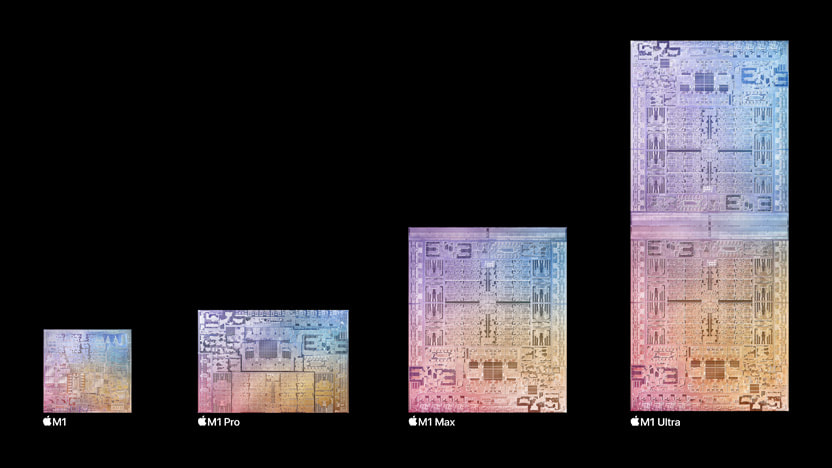 The M1 Ultra was built in a somewhat simple and brutal way, simply by integrating two M1 Max and doubling the specifications almost straight away. Of course, the actual implementation process is not simple, Apple enabled the interconnect module (die-to-die connector) in the M1 Max chip, which Apple calls “Ultra Fusion” technology, allowing the interconnection bandwidth of the two chips to reach 2.5TB/s, and has more than 10,000 signal points, which significantly reduces latency and improves efficiency.

The number of GPU cores of Apple M1 Ultra reaches 64, with a total of 8192 execution units and up to 196,608 concurrent threads, reaching a theoretical computing power of 21TFlops. The number of neural network engines also reached 32, capable of achieving a budget of 22 trillion times per second, eight times the performance of the M1.

The first benchmark results for Apple’s M1 Ultra chip also appeared on Geekbench, confirming that the doubled-up M1 Max can indeed outperform the top-end Intel version Mac Pro as Apple claims. The Mac Studio (Mac13,2) with a 20-core M1 Ultra ended up with a single-core score of 1793 and a multi-core score of 24055 in Geekbench 5.4.4.

Tom’s Hardware investigated the Geekbench 5 score on the market and found that the M1 Ultra’s multi-core score is comparable to the 64-core Threadripper 3990X, with only a 4% difference, which is close to the top server processor’s score.

The x86 processor is naturally not a flop, saving face in the single-core run scores, but even so, the M1 Ultra still scores in the middle of the i9-12900K and AMD Raider 9 5950X. Considering that the M1 Ultra has only 20 CPU cores and consumes only 60 watts of power, this is an incredible performance. Compared to the Threadripper 3990X with 280W TDP power consumption, the M1 Ultra has a 4.7x higher power efficiency ratio.

The Apple M1 Ultra is said to be Apple’s most powerful chip to date, with 20 CPU cores, including 16 performance cores and 4 energy-efficient cores. The GPU has 48 and 64 cores to choose from, a 32-core neural network engine, support for up to 128GB of unified memory, and a memory bandwidth of up to 800GB/s.