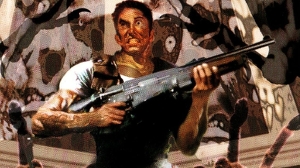 One of the great unspoken truths about video games, beyond all the intrigue and drama and the cold hard face of all that technology, is that they are made by mere humans. People like you and me, who face some of the same challenges, make the same mistakes, the same compromises, and experience some of the same triumphs and failures. Itchy, Tasty, a new look at the birth of the Resident Evil series from Alex Aniel, is as fine an illustration of all that as you'll ever see – indeed, perhaps its greatest achievement is how it goes beyond the legend that is Capcom's survival horror series and looks at some of the human stories behind it all.

I went in expecting a detailed history on the series and its origins – and Itchy, Tasty delivers all that and then some – but ended up with so much more besides. That's thanks in no small part to Aniel's approach, gathering first-hand accounts from the people who helped make Resident Evil a phenomenon. Aniel – a lifelong Resident Evil fan, even if he admits it was Silent Hill that first took his heart – has been a resident of Japan for some years, where he works as a producer alongside Japanese developers.

"Resident Evil changed my life in a lot of ways," says Aniel. "I found out that Resident Evil was a game by Capcom, and that Capcom was a Japanese company. So that was partly responsible for why I became interested in learning Japanese, and eventually came out to Japan to join the games industry as well."