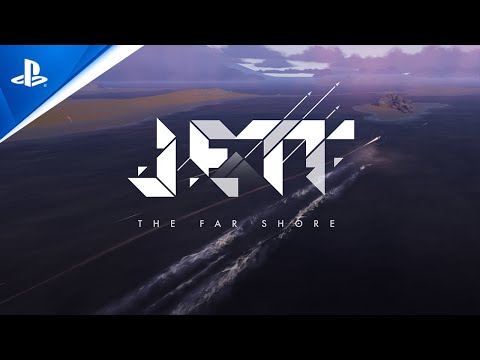 The mere notion of space and planet observation is tantalizing. Being able to discover new species and travel on otherworldly terrain is a fantasy that can only be realized through the medium of video games. Although many have tried, none have truly captured the excitement of exploration and serenity of space. JETT: The Far Shore looks to steer away from its peers by combining calming surveying of distant worlds and an intriguing narrative, but will this be the cosmic voyage that many have been pining for?

As Mei, you take to the stars in search of a planet suitable to house a civilization on the brink of extinction. Before mass migration can take place, Mei must collect data and canvas the area to ensure safe passage across the interstellar.

Piloting the Jett, you will drift through expansive worlds completing a range of menial tasks to determine if the area is suitable for colonization. Immediately, awe and wonder will wash over you as you begin to investigate uncharted worlds, which are shrouded in mysticism. The dynamic camera pulls out to emphasize the magnitude of areas, promising unique discoveries just over the horizon. Whilst impressive in size, areas are barren, failing to capitalize on the possibilities that lie with the premise.

Objectives are simple, requiring you to tediously move back and forth to points, scan creatures and collect items. Although researching the area is a relaxing, low-pressure mission, it quickly becomes a chore. This was heightened when given a time-based objective, one of which was to aimlessly wander around for 20 minutes scanning items. The game wants you to take your time, early on you lose the ability to use your thrusters, which results in an awful mission where you slowing move through areas collecting resources to fix them. Skimming over the vast ocean is enjoyable. The sleek ship is responsive, allowing you to zip across the enormous environment. Superbrothers has managed to capture the tranquillity of coasting through the sea. You can glide into the air and elegantly dip into the water with ease. Thrusters can overheat, requiring you to manage this aspect whilst veering across the terrain. Issues arise when gliding over islands. With obstacles in your path, you must avoid hazards in order to complete your objective. At these points, the game drops to a snail’s pace. The ship feels sluggish, making movement in tight areas difficult. As well as this, you’ll have to battle with the camera which seems to wander off on its own, making these segments quite frustrating. This is amplified due to the finicky controls. Rather than simply pressing the button, you have to hold it to activate and deactivate the thrusters. In addition, when an objective appears, you will be required to line up your screen with the area for the mission to initiate. Although these are small issues, they merge to create a drab expedition.

Polarising the peaceful expedition are hostile creatures that will chase you through the environment. Scanning the beast will give you information on how to defeat them which tends to rely on using items in the area: basically more scanning. However, you can hide from some and hope they bugger off. These aren’t particularly fun segments but they do alter the plodding pace of exploration that makes up the majority of the game.

At certain points, you disembark to explore the world on foot. Here, the camera shifts to a first-person perspective allowing you to take in the wonderful surroundings. These sections are narrative-focused, giving you the opportunity to speak to the various characters you encounter. With the audio being in a different language, you are forced to read reams of dialogue which can be quite distracted when swooping through the world in the Jett. Mei ambles along the ground at an excruciating pace, creating painful moments where you attempt to rush back to the ship. A highlight of the game is the stunning combination of visuals and sound. The incredible score perfectly echoes the alien world. Due to the atmospheric soundtrack, a great sense of despair and hope are gloriously merged, instilling unease as you drift through the mystic world. Elongated shadows streak across the seas as the light shimmers through the cracks in the architecture, emitting a calming aura, which is only slightly tarnished by the odd performance issue.

JETT: The Far Shore is an ambitious game that is unrelenting in its vision. Placing peaceful exploration at the forefront, missions lack direction and purpose. Although great when flying long distances, the Jett encounters many issues in compact areas. With stiff movement, dull missions and frustrating enemies, JETT: The Far Shore falls short of its ambitious goal.

The post JETT: The Far Shore Review – Lost in the Cosmos appeared first on COGconnected.