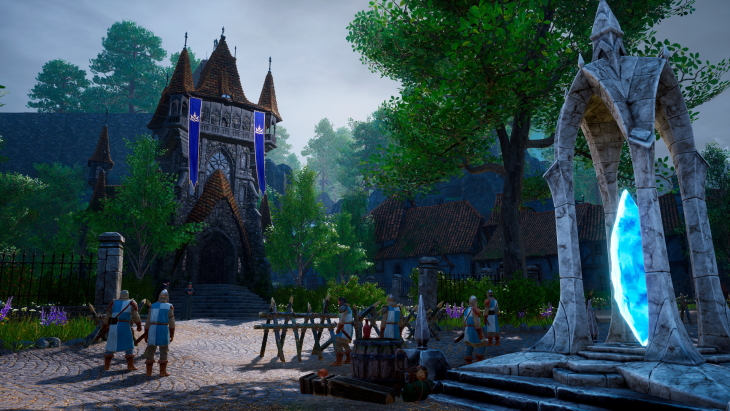 As previously reported, the series has shifted from it’s focus to dark fantasy- and features changes to gameplay as well. This includes equipment and experience points for units, factions within races, being able to keep an infinite number of units in reserve, and more.

The new story trailer focuses on how Nostria is beset with conspiracy, sabotage, and necromancy. As nations are demanding independence, bandits run riot, and the power of the Blight is spread as rumor; the king is poisoned.

Now Prince Adrian must unite the lands, as the kingdom, the crown, and the faith are under attack. He will need the help of a savior, and that savior may be you.

You can find the Unite Them or Fall trailer below.

You can find the rundown of the game (via Steam) below:

Offering a fresh take on the acclaimed fantasy series, King’s Bounty 2 expands upon its tactical turn-based battles to offer players a truly immersive RPG experience that adds weight to their every decision, whether leading an army into battle against unliving horrors, or building relations with local townsfolk. Experience a rich world that blends realism and fantasy, filled with compelling stories, memorable characters and moral choices aplenty!

Taking on the mantle of one of three heroes – each with their own unique story – players embark on a non-linear, open-world adventure across a detailed and densely-packed fantasy landscape. Split into two distinct phases, players traverse the realm from a third-person perspective, picking up quests, exploring the wilderness, and getting to know the people they meet. When conflict arises, however, the perspective shifts to tactical, turn-based combat. Players must then make smart use of their units as they fight to win.

Set in the vast realms of Antara, a great danger has arisen. A mysterious blight has descended upon its furthest reaches, corrupting the land and all who live there. Refugees from the affected regions have begun arriving in the kingdom of Nostria, putting food and resources in short supply. Once living souls, blight-distorted creatures now roam the countryside leaving chaos and destruction in their wake. The land itself fights for survival, giving your decisions greater weight than ever before. How will you forge Antara’s future?