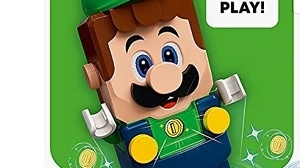 A now-removed Amazon China leak has confirmed the upcoming release of a Lego Super Luigi toy and playset.

This second Starter Course was spotted by The Brick Fan before the original listing was taken offline. It also contains a pink Yoshi, Boom Boom and a Bone Goomba.