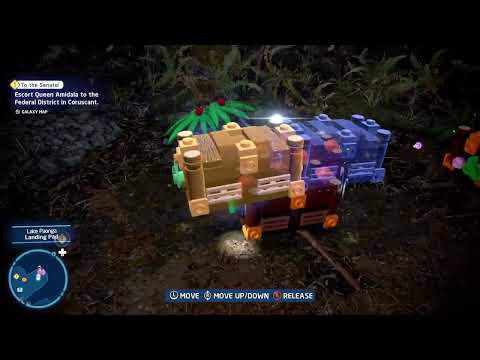 As the biggest Lego game so far, Lego Star Wars: The Skywalker Saga is filled with fun references and Easter eggs, from Crazy Taxi to Lord of the Rings.

You can always count on a licensed Lego game to make some cute tongue-in-cheek gags about the franchise it’s based on. So, with Lego Star Wars: The Skywalker Saga covering all nine mainline films, it’s stuffed to the gills with in-jokes and Easter eggs.

It’s not just limited to the Star Wars franchise either. There are numerous references to wider pop culture, including other films and video games – especially if one of the film or voice actors starred in them.

With it only being a day old, there are no doubt loads that have yet to be uncovered, but here’s a rundown of some of the best, funniest, and surprising ones so far.

While The Skywalker Saga may be the definitive Lego Star Wars experience, there were five other games beforehand, and developer Traveller’s Tales has a couple of neat tributes to the pair that started it all.

In the first The Phantom Menace level, you can spy the box art for the first Lego Star Wars game, which only covered the prequel trilogy of movies but kicked off Traveller’s Tales legacy of licensed Lego games.

The box art of the second Lego Star Wars games, which adapted the original trilogy, can be found during the first A New Hope level, as Princess Leia attempts to escape Darth Vader and his Stormtroopers.

What happened to your accent?

A bit of an obscure one, but some players may be wondering why Leia speaks with a British accent during the beginning of A New Hope but, upon escaping the Death Star, drops it for an American one.

Believe it or not, this is not an oversight on the game’s part, but a direct reference to the original movie. Leia’s actress, Carrie Fisher, did the exact same thing, later admitting that it was partly due to nerves.

Since this is Star Wars and everything needs an explanation, an in-universe reason was given in the Star Wars: Bloodlines book. Supposedly it was because she was mocking Grand Moff Tarkin, who was played by British actor Peter Cushing. Right.

As another creation of George Lucas’ that also stars Harrison Ford, it’s hardly surprising for there to be at least one Indiana Jones reference. During the third The Force Awakens level, you can find a room containing what looks like the Ark of the Covenant from Raiders Of The Lost Ark.

This is extra fitting as this is the level where Rey and Finn cross paths with Han Solo, the moment in the film where Harrison Ford made his grand return to the Star Wars franchise.

This could also be referencing Traveller’s Tales own Lego Indiana Jones games. The first one came out in 2008 and covered the original trilogy of the films, with the 2009 sequel being an enhanced revision plus new levels based on Kingdom Of The Crystal Skull.

The Skywalker Saga loves referencing the franchise’s actors’ other movie roles. Take Dominic Monaghan, for example, who makes a minor appearance in The Rise of Skywalker as the Resistance fighter Beaumont Kin.

You can find him and a friend at the Resistance Camp on the planet Ajan Kloss, sitting atop the engines of Leia’s ship the Tantive IV. He complains about Leia not approving his request for ‘second breakfast’ and is trying, and failing, to cook sausages using the ship’s exhaust.

Get the engines running by shooting the gold coverings (you’ll need a bounty hunter character) and you’ll be rewarded with the Fortitude spaceship, as Kin’s unnamed friend asks you to not tell Leia and to, ‘Keep it secret, keep it safe.’

These quotes are both clear references to The Lord Of The Rings movies, which Monaghan starred in as the hobbit Merry.

A special set of skills

Speaking of actor references, there is also a less than subtle reference to the Liam Neeson movie Taken. It appears to trigger if you’re solving a puzzle with Qui-Gon Jinn, who will say ‘I have a particular set of skills that will come in handy here.’

This line is taken (ha!) from Neeson’s iconic speech to the man who kidnapped his daughter. Qui-Gon Jinn was, of course, also played by Liam Neeson in The Phantom Menace.

The references to non-Star Wars pop culture don’t stop there either. Even the names for levels and side quests have some funny allusions and puns, when they’re not referencing famous Star Wars lines.

Some personal favourites include a Phantom Menace level called Better Call Maul (Better Call Saul) and an Atch-To side quest called Fisherman’s Friend, which is named after the menthol lozenge which we’re betting the game’s American publisher has never heard of.

Sega barely acknowledges Crazy Taxi nowadays but someone at Traveller’s Tales is clearly a fan. There’s a side quest on the planet Coruscant called Unfair Taxi, where you have to help retrieve a stolen taxi.

Upon completion, the owner will say he can now make ‘crazy money,’ a direct quote from Crazy Taxi. He even says it in a similar voice and inflection, and now we want a Lego Crazy Taxi game. Or at least a Lego set.

Did anyone expect Lego Star Wars to reference Xenoblade Chronicles of all things? Turns out one of the developers is a fan and saw a golden opportunity to do so.

A random side character found in Jabba’s Palace, called simly Disco Director, is voiced by none other than Adam Howden, the voice of Xenoblade protagonist Shulk.

Speak to him and he’ll say ‘I’m really feeling it!’, which is one of Shulk’s battle lines from the first game and has since become something of a catchphrase for him (it’s even one of his taunts in Super Smash Bros.) and a running joke throughout the series, with a couple other characters quoting it as well.

Apparently, according to the developer’s Reddit post, Howden was unsure about the line until he learned it was a Xenoblade reference. Glad to know he loves it as much as the fans do.