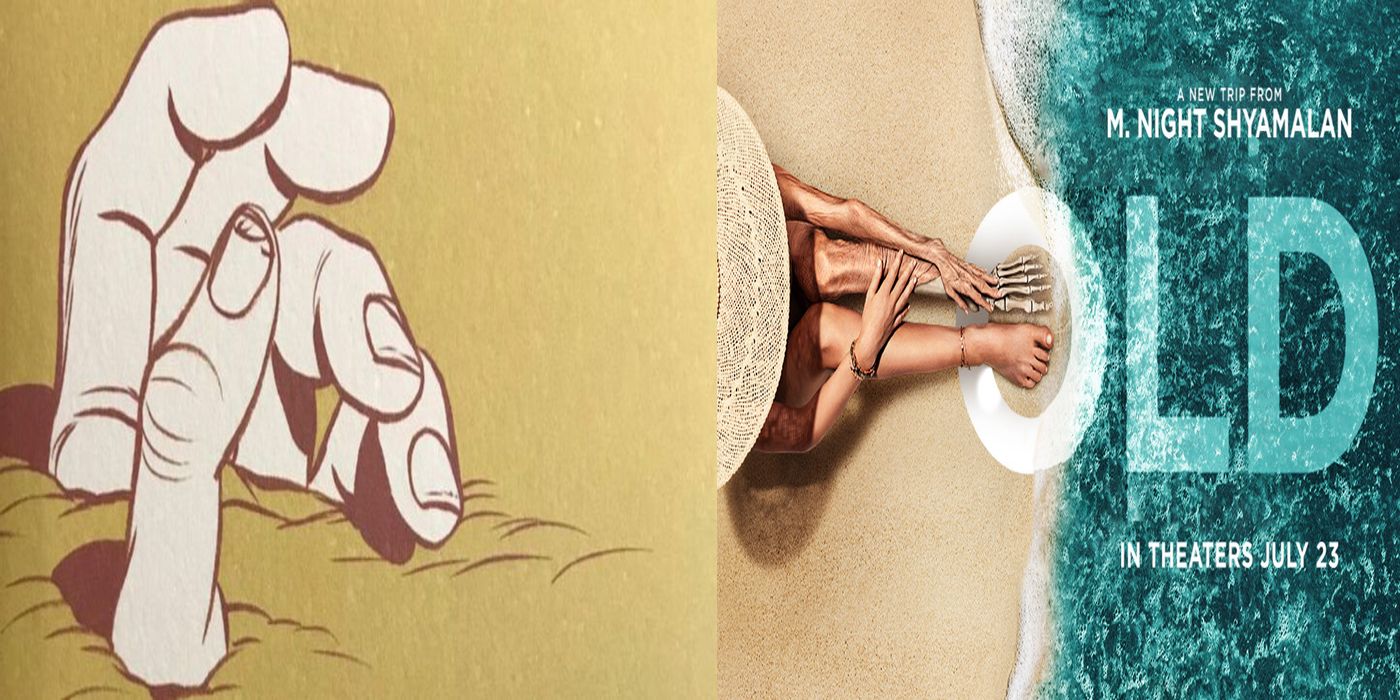 This Article Contains Spoilers for Old and Sandcastle

M. Night Shyamalan's Oldwent wrong in many large and small ways, netting a 50% on Rotten Tomatoes and deeply mixed reviews from critics and audiences alike. Many of the film's more controversial aspects come from Shyamalan directly, but the film is an adaptation that misses much of its source material.

Old is a loose adaptation of a 2010 graphic novel entitled Sandcastle by Pierre Oscar Levy and Frederik Peeters, Shyamalan reportedly decided to adapt it after receiving the novel as a Father's Day gift. The film takes the premise of the novel but changes the execution in many substantial ways that affect the overall piece.

Adaptation is a tricky beast, turning a 330-page graphic novel into a 108-minute film can often require moving things around to fit the new medium. Despite that obvious allowance, messing with the symbolism or meaning of a piece of art can ruin the impact of an otherwise great work. This is not the first attempt at translating a work to film that Shyamalan had a rough time with. The changes made by M. Night Shyamalan have a massively negative effect on a haunting and powerful novel.

The changes start at the top: the new title is silly. Many have mocked the brief and on the nose title Old, but the problem with it is its complete lack of meaning or intrigue. Old is a title that says nothing about the work it is applied to and carries no particular symbolism. It sounds more like a comedy about aging than the supernatural horror film it actually is. On the other hand, Sandcastle is an excellent title, classic easy symbolism for a story about the fragility and beauty of mortality. Anyone could piece together the meaning of a title like Sandcastle, it's elegant and meaningful without being obtuse, which raises the question of why one would feel the need to change it.

Despite the nearly identical circumstances of the premise of both works, a trio of families and a couple of strangers come to a mysterious beach which causes them to age rapidly, the actions of the participants differ greatly. The narrative of Sandcastle carries commentary about racism mixed in with its examination of age and mortality. That element is present in Old but less focused. In addition, the people who find themselves on the deadly beach react much more harshly in the film. The tragic families of Sandcastle gradually reach a level of comradery as fear gives way to acceptance, but the families of Old fight and occasionally kill one another. The violent rage of the victims undermines the message of the original work.

The biggest and most destructive change is the big twist of the film. An act 3 plot twist is a hallmark of Shyamalan's filmmaking style, at this point it would be more surprising if a film of his had a straightforward plot, so of course Old is no exception. In Sandcastle, there is little to no explanation of the beach, the effects, or why the victims are there. Characters share guesses, some theories have some incidental support in the narrative, but ultimately the story is ambiguous. But a story with that level of openness is often not able to make it to the big screen.

In Old, the heavily mocked beach that makes people old goes largely unexplained as it does in the graphic novel, elements of it are referred to as special, but it seems to be a supernatural mystery. While the beach goes unexplained, the film does offer a brand new explanation for the victims of the beach. Sandcastle features random people united only by being in the wrong place at the wrong time, then suffering the same fate together. In Old, the victims are united by the fact that one of each of their groups suffer from a chronic health condition such as epilepsy or cancer. They are each given a concoction of medicines that is said to be specially designed for their malady, then given an all-expenses-paid vacation to a particular beach resort. The big reveal becomes quite easy to guess; the pharmaceutical company uses the beach to test the long-term effects of its medicine, at the cost of its patients.

This twist seems to have its aim set upon satirizing big pharma companies and their unethical practices by putting the blame on them for a previously unexplained event. While the company is clearly not responsible for the existence of the mysterious beach, they are the owners and the culprits of the many deaths that have occurred there. The characters in the film are explained to be the 73rd test group to experience the beach's effects. This change has a number of negative effects, the most obvious being a few plot holes as dozens are killed by this beach. The narrative damage done is not insignificant, but the real damage is to the meaning of the work.

Ambiguity can be a powerful tool in storytelling, though it is typically important to justify what is happening, leaving elements to the imagination can allow for deeper meaning and more moving horror. Sandcastle is a story about mortality; much like life, humans appear without reason, exist for a brief time, try to make the most of their life, then die. Old is a story about corporate malfeasance, using a weird supernatural landscape as a tool for profit. This change completely ruins the strength of the original story. Though the two are superficially similar, they are deeply different.

Old fails entirely to capture the beauty, cleverness and meaning of Sandcastle, which makes it a tragedy that nearly any copy of the novel now comes with a sticker advertising the film that misunderstood it. Old fails in many ways, but perhaps the most substantial failure is the bad name it gave an otherwise great graphic novel.