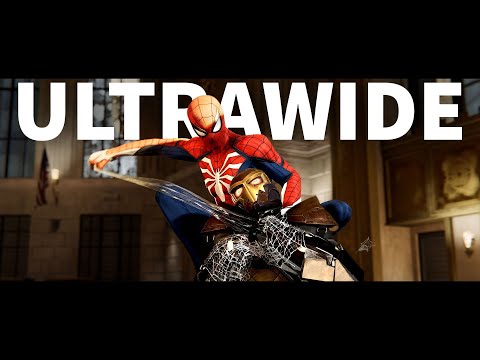 I write about a lot of niche subjects, like VR mini-golf. ethical mobile games, and occasionally, my love for Hollywood’s most subversive blockbuster megahit, James Cameron’s Avatar. Among my many bizarre and esoteric passions is one that has been gaining more and more mainstream appeal recently, and one that I predict will be a staple of every gaming setup in just a few short years. I’m talking about ultrawide displays. Those ridiculously expensive, surfboard-length monitors you see at conventions are the next evolution in immersive gaming. If you don’t believe me, spend ten minutes playing Marvel’s Spider-man in 32:9, and I promise you’ll never again be satisfied by a normal widescreen TV.

I bought my $1,400 42” Samsung Odyssey G9 in 2019 to play Destiny 2, which I recognize is gratuitous and absurd. Three years ago there were very few games that supported any aspect ratio wider than the standard 16:9, and while there are still plenty of games that require some tinkering to fit an ultrawide, major triple-A releases have been fairly consistent with 21:9 and 32:9 support over the last few years. Sony is largely paving the way with its recent batch of PlayStation ports, which have all delivered an exceptional ultrawide experience.

Horizon Zero Dawn was the first game I played in super ultrawide that took my breath away. Its stunning vistas were even more gorgeous stretched across a panoramic display, and the battles between Aloy and the hulking, monstrous machines of the post-post-apocalyptic future were given an even greater sense of scale. Ultra- and super ultrawide always have an exaggerated curve that adds depth to the image and ensures your periphery is completely filled, which made playing Horizon Zero Dawn a deeply immersive experience. I wrote at the time that this is the way Horizon was always meant to be played and it’s still the first game I recommend to new ultrawide owners. As of this week, however, Marvel’s Spider-Man is giving Horizon a serious run for its money.

There are some major enhancements in the PC port of Spider-Man that Horizon Zero Dawn was sorely lacking. While Horizon presented its cutscenes in the original 16:9, all of Spider-Man’s cutscenes have been scaled and reframed to fit wider resolutions, so you never feel like your screen real estate is being wasted. Spider-Man also supports ray-tracing and DLSS, which Horizon did not. Deep Learning Super Sampling can help you gain a lot of extra frames, and when you’re working with a 5120×1440 resolution, you need all the performance help you can get. Spider-Man is better optimized and, if you’ve got the hardware to support it, a more visually impressive game than Horizon, technically speaking.

But the biggest advantage that Spider-Man has in ultrawide is the way the setting and gameplay compliment an extremely wide focal length. While ultrawide helped you take in more of the beautiful environments in Horizon, with Spider-Man, you get awe-inspiring skylines. With the entirety of New York City stretched out before you, the sense of scale is profound. The ability to take in more of the city makes the whole world feel more dynamic and alive. Perching on the edge of Avengers Tower and looking out over Manhattan is a wholly different experience when you can actually see the entire city sprawled out in front of you. You can’t appreciate how big the world is unless you’re looking at it through a wide enough frame.

This gargantuan display pays for itself the moment you leap off the first rooftop and start swinging through the city. There is an inherent defect in all ultrawide displays because of how camera lenses work. Actual cameras, virtual game engine cameras, and even our eyeballs create distortion and stretching at the edges of the field of view. Your brain automatically compensates for this problem in your eyes, but ultrawide monitors exaggerate this distortion at the edges significantly. Fascinatingly, Spider-Man turns this defect into an advantage.

The stretching at the edges actually increases the sense of speed and acceleration as you web-swing through the city. When you dive from the tops of skyscrapers and zip from tree to tree through Central Park, the buildings and features at the edge of your periphery stretch past you and give you the sense that you’re moving even faster. Swinging down avenues and through alleyways is even more exhilarating thanks to the tunneling effect provided by the aspect ratio. Check out this gameplay from GameSpot in ultrawide 21:9, then imagine it even wider at 32:9. It’s a difficult thing to convey, but once you see it for yourself you’ll never want to go back.

Sony’s effort to support ultrawide on PC will have a big impact on the way the industry embraces the format. As monitor prices naturally fall and more and more games release with ultrawide as a standard, the adoption rate will necessarily increase, which will in turn increase the demand for ultrawide games. A lot of gaming and graphical tech tends to be arcane, but unlike ray-tracing, HDR, and DLSS, ultrawide is physical, tangible, and immediately recognizable. When you see a game in ultrawide, you know immediately what it is and how much value you’re getting. It may be niche today, but games like Marvel’s Spider-Man prove that ultrawide is the way games are meant to be played.