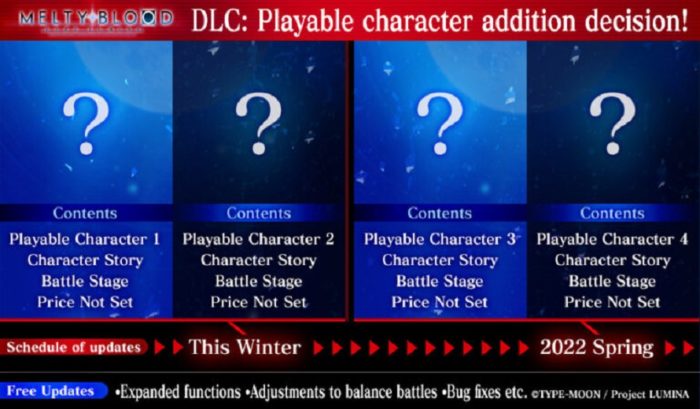 Melty Blood: Type Lumina is a 2D fighting game that launched on 30th September on the PlayStation 4, Xbox One, Nintendo Switch and PC. Prior to its release, it was confirmed that fan-favorite Saber would be added to the game’s roster as a last minute announcement and the developers have now confirmed the upcoming DLC schedule for the game that will take fans all the way into Spring 2022. The DLC content will bring a ton of new additions to the game for players to enjoy.

The company has confirmed four content releases, commencing this winter until Spring 2022. Each content release will bring a playable character, from 1 to 4, along with a new Character Story and Battle Stage. Unfortunately, the details on each release has not been divulged and the price of the DLC remains a secret for now.

Furthermore, the developers have confirmed that within that period, there will be free updates. The free updates will introduce expanded functions, bug fixes and various adjustments to balance battles.

Melty Blood: Type Lumina is the latest iteration in the 2D fighting series based on the Type-Moon visual romance novel, Tsukihime. Players can explore an entirely new worlds, written by Kinoko Nasu, wherein they experience new stories for each character, HD graphics and premium battle animations.

Players can customize fine details of their experience including portraits, titles and character outfits. The game includes an iconic battle system along with powerful techniques via the Moon Skill System. Players will also be able to enjoy multiplayer with fresh netcode that stabilizes the online connection.

What are your thoughts on Melty Blood: Type Lumina? Are you interested in fighting games? Are you excited for the upcoming DLC content? Let us know in the comments below or on Twitter and Facebook.