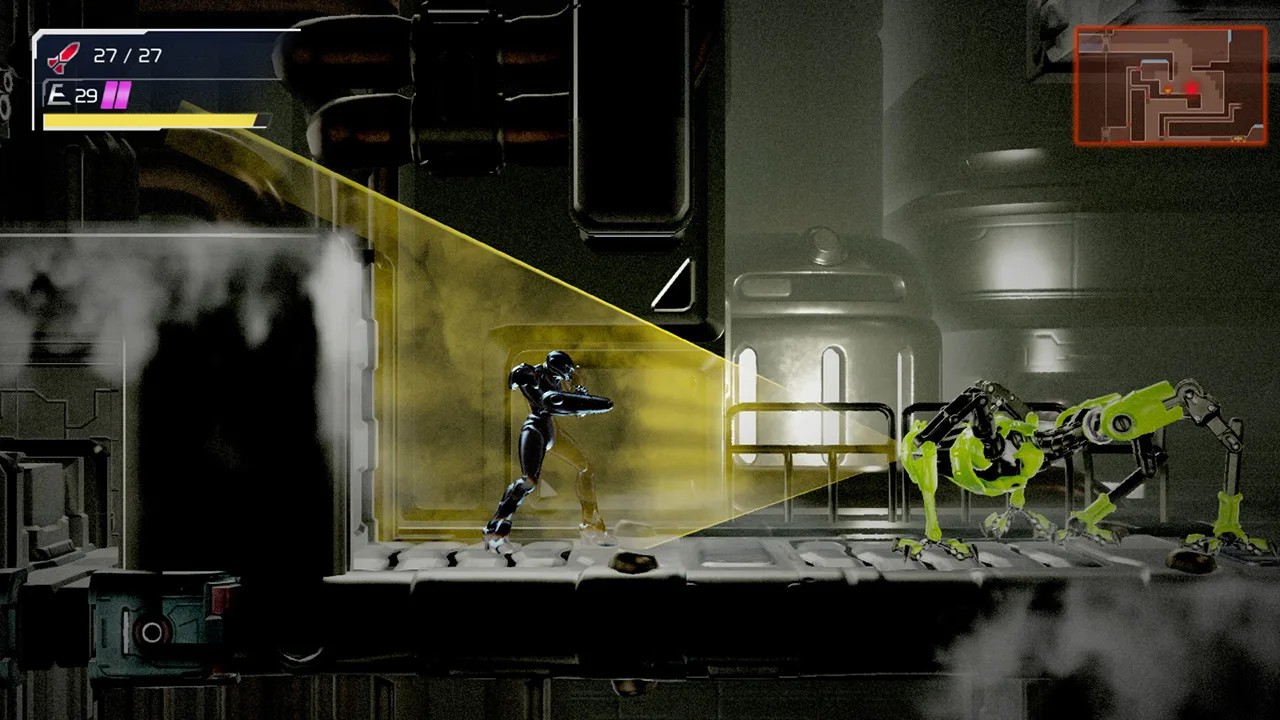 Upgrades are the defining characteristic of Metroidvanias. The power progression that comes when collecting new and improved abilities and weapons is what makes Metroid such a joy to play, and the structure of a Metroidvania depends on the lock and key relationship between upgrades and the access they provide. Metroid Dread brings back all of the classic upgrades from Metroid history while introducing some fun new abilities like Flash Shift that help modernize the game and make combat more engaging. I love the way Dread turns certain abilities into upgrades of existing abilities to help alleviate some of the clumsiness that comes from weapon swapping, but at the same time, I feel like there might just be too many upgrades overall. There are so many upgrades in Dread that not all of them get the chance to shine, and some of them feel downright redundant.

There are 23 upgrades spread across Dread’s eight zones, and the vast majority of those are abilities I would consider essential to Metroid’s identity. Upgrades like Charge Beam, Screw Attack, Super Missiles, and the Varia Suit are non-negotiables. Even though you know they’re coming, it’s still a joy to find the Grapple Beam and know exactly which areas that opens up for you. I especially liked how long Dread holds back on the Morph Ball because it makes you feel practically desperate to unlock it by the time you finally find it. It’s functionally nothing more than the ability to crawl, but it’s such a valuable tool that gets used throughout the entire game.

Related: The Hardest Part Of Metroid Dread Is The Control Scheme

My grievances about the abundance of upgrades essentially comes down to the sheer numbers of abilities that overlap and replace previous abilities and render early unlocks obsolete. The upgrade from normal missiles to Ice Missile to the Super Missile and Storm Missile is a welcome change because juggling ammo types was never convenient in the old Metroid games, but other upgrades go too far. Samus’s beam gets the Charge Beam upgrade, but then it becomes the Wide Beam which becomes the Diffusion Beam which becomes the Plasma Beam which becomes the Wave Beam, and I’ll give you a dollar if you can tell me what all of those do and if they’re in the right order. It’s simply too many upgrades for a single ability, especially when the Wave Beam is the Diffusion Beam but just a bit better.

Similarly, do we really need the Space Jump, Spin Boost, and the Screw Attack? The Space Jump has always been the same thing as the Spin Boost, but now we get a weaker Space Jump so we can get a better Spin Boost later. There’s too many upgrades that replace other upgrades in Dread. When the sequence breakers really dig into Metroid Dread I suspect that they’ll find the vast majority of upgrades are completely irrelevant if you know how to get to later, superior versions of the same ability.

While I appreciate that missiles have been streamlined, do we really need three types of bombs? The Cross Bomb is wildy underused unless you’re pursuing all of the secret items around the map, and at that point you’ll start to realize how incredibly frustrating it is to use. After it’s unlocked, I don’t know if there’s ever a time when you need to use a single bomb instead of the Cross Bomb, yet for some reason you continue to have access to both abilities.

And finally, my most controversial take: Phantom Cloak has no place in Metroid. All of the sensor doors that require the Phantom Cloak could easily be replaced with the pressure doors you bypass with Flash Shift, and if you’re using Phantom Cloak to dodge EMMIs, you’re doing it wrong. EMMI encounters should be fast and frantic like a game of ultimate tag, not slow and cautious like you’re playing Outlast. If you’re cowering in a corner waiting for the EMMI to walk past you, you’re just wasting your time. Run past the bastard and juke him around a corner. If he catches you, just try again. I never had success trying to stealth around with the Phantom Cloak, and I always had a lot more fun just outrunning the robots.

Replacing so many abilities with slightly better versions of the same ability took away the satisfaction of hunting down upgrades. It also felt like certain upgrades didn’t get much time to shine, like the Grapple Beam, which is significantly underused compared to past Metroid games. It’s a minor complaint in the grand scheme of things, but it suggests a type of bloat that could become detrimental in the future if Metroid games continue to add more and more unnecessary upgrades. Storm Missile and Flash Shift are huge wins for Dread, but they’re counterbalanced by total duds like Cross Bomb and Phantom Cloak. Sometimes less is more, and as much as I love beams, I don’t think I needed six of them.

Next: Adam Takes All Of The Dread Out Of Metroid