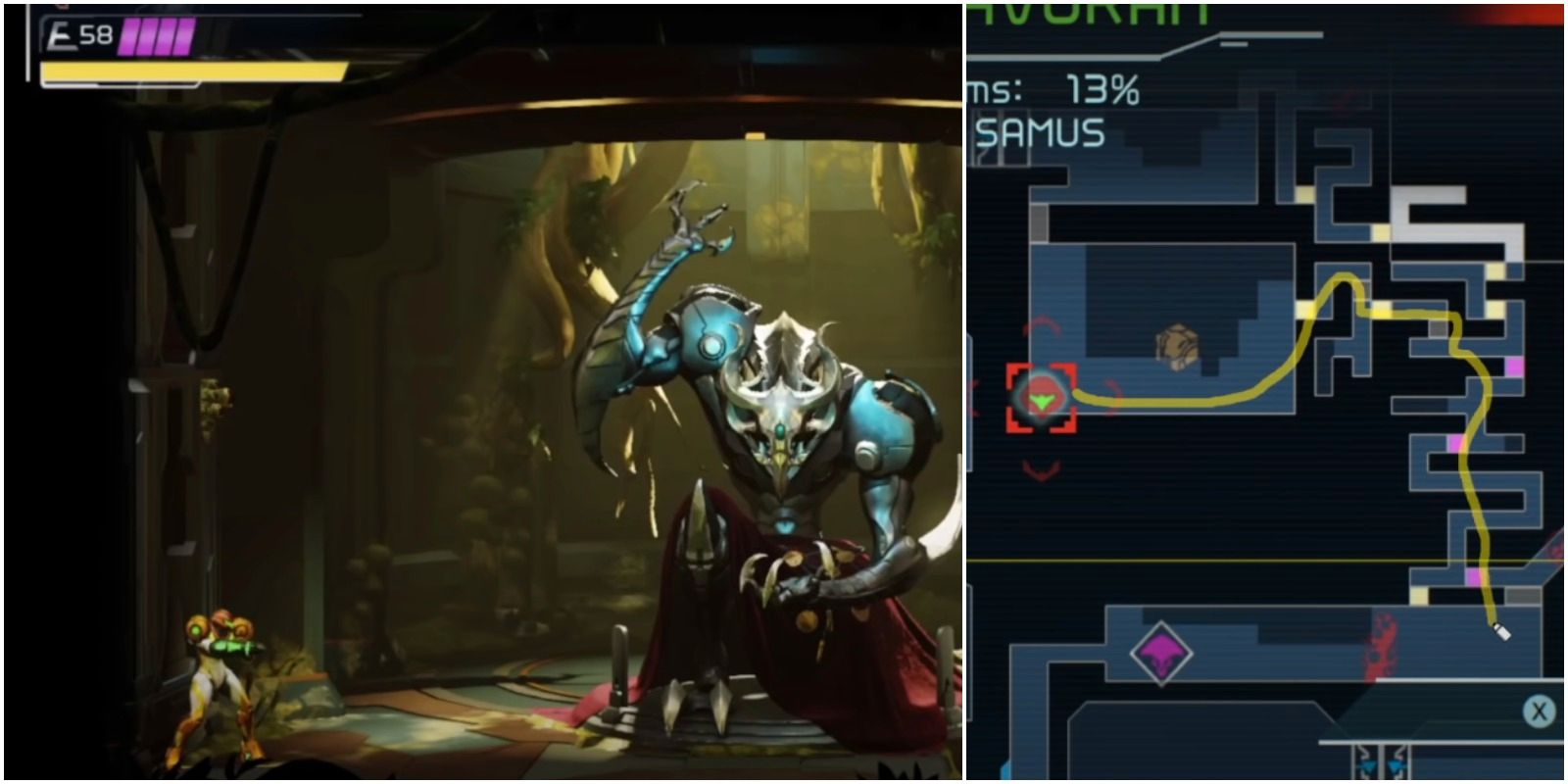 Those wishing to get a better clear time on their next speedrun attempt of Metroid Dread, or even those wishing to simply perform a cool skip, can do so by using the Ice Missiles upgrade, Shinespark leaps, and some well-timed Speed Booster sprinting to unlock the best suit in the game–the Gravity Suit–much earlier than normal.

RELATED: Metroid Dread: Where To Go After Getting Speed Booster

In the Ghavoran region, in the room where the Gravity Suit can be found, it is normally only accessible after players obtain the Space Jump ability in Ferenia. However, by following these steps, players can get the Gravity Suit to make the rest of Metroid Dread much quicker and easier.

Step 1 – Start From Where One Gets The Pulse Radar

Firstly, players will need to start in the room within the Ghavoran region where players pick up the Pulse Radar upgrade. The Pulse Radar is not needed for this skip, this room is just the best starting point as indicated by the discoverer of this skip, YouTuber Hardpelicn. From here, head to the right and make one’s way down the twisting shafts by using Bombs in Samus’ Morph Ball mode.

From the bottom, which will initially have an Enky fire plant, players will need to shoot the burning bit of vegetation with an Ice Missile to clear it out of the way so that the next step can be taken.

Step 2 – Use Speed Booster & Shinespark To Get Across The Water

In the long room with the Enky fire plant and the purple charging station, players will need to start from the far right of the room then speed boost to the left and press down to charge the Shinespark power with the momentum generated from the speed boosting. This will lead the player into the left room housing many blue blocks (Screw Attack Blocks) and some water which will need to be crossed.

RELATED: Metroid Dread: Where To Go After Getting Space Jump

Without the Space Jump, it’s normally not possible to clear the gap to the right, however, the power of a Shinespark can allow players to leap energetically across this watery pit. It is possible to perform the Shinespark leap directly from the left edge of the screen to the right and grab the ledge, however, jumping before unleashing the Shinespark and sailing to the right will be quicker and potentially help players avoid missing grabbing onto that right ledge. It’s important to remember that to use a Shinespark while in the air, players will need to press the Y and B buttons at the exact same time while pointing in the direction they want to go (in this case, the right).

After entering the right screen after clearing the gap of water, players will need to roll in Morph Ball mode to the right until they fall through the Pitfall Blocks next to a Missile Tank upgrade. This will drop players into a room with the Green Teleportal that will transport Samus to Burenia.

After teleporting to Burenia, place a Bomb on the ground to the right of the Teleportal to break a Bomb Block and find a winding passage leading down that has 3 more Enky fire plants. Use one’s Ice Missiles to clear the way and enter the room to the right after reaching the bottom of this shaft.

RELATED: Metroid Dread: How To Get The Ataria Energy Tank (Speed Booster Blocks)

In this new room, walk as far to the right as one can without dropping down. With enough space and an open door, players will need to speed boost to the left, back into the previous room, and charge a Shinespark and stop before running into the wall. This will break some Pitfall Blocks and drop Samus down into a small corridor that leads to the right through another door.

Being quick as to not allow the Shinespark to fade, swiftly drop down and squeeze through a small gap in the bottom right of the nearest wall to fall toward some water between a slope on the left and a magnetic blue wall to the right. In mid-air, players will need to unleash their Shinespark while aiming to the left. This will cause Samus to hit the slope and slide up it until her feet reach level ground. Sliding up the slope will not reset Samus’ momentum, so keep holding the analog stick to the left to keep the speed boost going.

Step 4 – Continue Using Shinespark To Clear The Next Few Screens

Drop down and Shinespark oneself through the rocky wall on the right to enter the next room, where players will need to perform a few more tricks, albeit much easier ones, to obtain the Gravity Suit.

Once through the rocky wall and in the new screen that’s mostly underwater, players will have to navigate some tight corridors and blast some red and squishy Diffusion Blocks. Get to the slightly more open area above and blast more Diffusion Blocks to reveal a Grapple Beam Block that needs to be pulled to allow the big piece of machinery in the background to fall down and break through the ground–thereby opening the passage to the left, which leads to the room with the Item Sphere containing the Gravity Suit.

Afterward picking up this awesome upgrade, be sure to utilize Shinespark once more to get out, as, without Space Jump, players can get stuck here since the game thinks one has this ability. Go back to the spot where the big piece of machinery crashed down and use a Shinespark charged in the room with the Gravity Suit to rocket upward and grab onto a ceiling above the area where the machinery initially was located. Head to the right and go about the game as one sees fit with an early Gravity Suit equipped.

Metroid Dread is available on the Nintendo Switch.