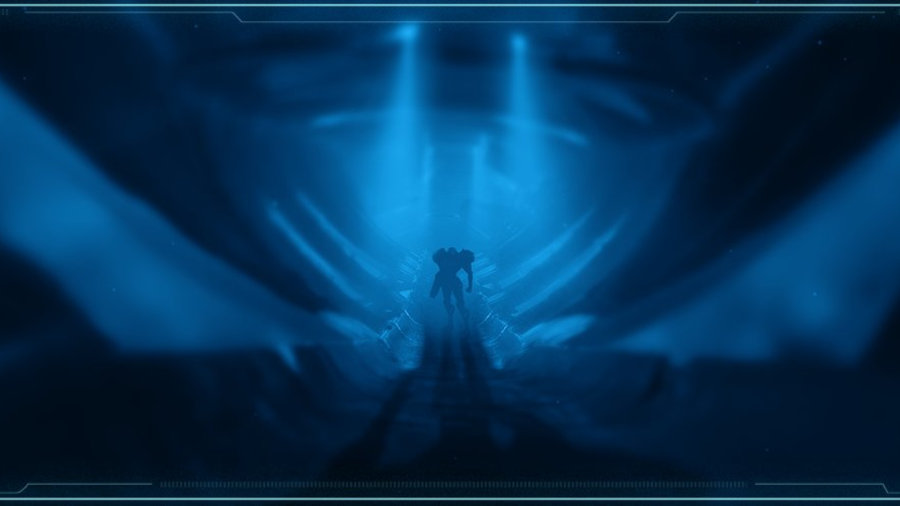 Metroid Prime 4 is something of a mystery. So much so, that fans of the series will leap on any announcement, tease, or grain of information about Samus’s next 3D adventure in an instant. The latest hint to come our way is from developer Retro Studios itself, in the form of a new Twitter banner.

Spotted by prolific gaming tweeter Nibel, Retro Studios has updated their Twitter banner to a new, previously unseen piece of concept art that appears to give us our first visual tease of Metroid Prime 4.

The artwork features what looks to be a silhouette of Samus standing in the middle of an atmospheric corridor. The architecture around her looks fairly alien, and the blue filter gives the impression she’s underground or within the gangway of a spaceship. The added border at the top and bottom of the image might suggest we’re looking through another character’s visor, too.

Social media banners don’t usually stir much excitement, but given how little we’ve seen of the game since it was first announced in 2017 and later handed over to Retro Studios in 2019, fans are making the most of opportunity in some pretty wild speculation threads.

One Twitter user thought the image might be the first-person view through the visor of bounty hunter and long-time Samus antagonist Sylux. “I’ve been waiting for the triple Sylux payoff from Hunters, Prime 3, and Federation Force for so Long,” wrote Biotanker.

Others pointed out the image’s blue tinge is similar in color to the Phazon energy that cropped up throughout the original Metroid Prime trilogy before being destroyed in its climax. Phazon played a big part in the second game, creating its chief antagonist Dark Samus, and appeared back in the third to create a new breed of mutated Metroids.

A poster on Reset Era suggested the image looked like an abandoned duct, and might hint at the “that the game will be more dark and desolate than previous titles. Maybe they will go back to the creepy nature of the original Metroid.”

Others have been a little more conservative in their speculation, with one Reddit user noting that Samus’s bulky armor design doesn’t appear to have significantly changed from the previous Metroid Prime Games. And, of course, others treated the reveal a little more lightly, jokingly pointing out it’s been five years since the game’s initial reveal, and all they’ve got to see is a single piece of concept art.

A five-year wait for only a single piece of cryptic concept art will probably leave some Metroid Prime fans disappointed, but the mere appearance of the artwork suggests Retro Studios is gearing up for a bigger reveal. Up to this point, news on the game has been extremely sparse.

Outside of an original reveal trailer, the odd job listing, and the shock announcement in January 2019 that Nintendo had scrapped Bandai Namco’s original design to hand the project to series creator Retro Studios, we haven’t seen anything concrete.

During February’s Nintendo Direct, the publisher announced a whole host of upcoming games for Nintendo Switch, including Mario Strikers: Battle League, Nintendo Switch Sports, and a new Fire Emblem Warriors. Metroid Prime 4 wasn’t among them, but with multiple presentations held throughout the year, it’s not unlikely we’ll see Samus Aran popping up in a new trailer sometime in the next 12 months.

In the meantime, though, you can pick up a copy of the excellent Metroid Dread.