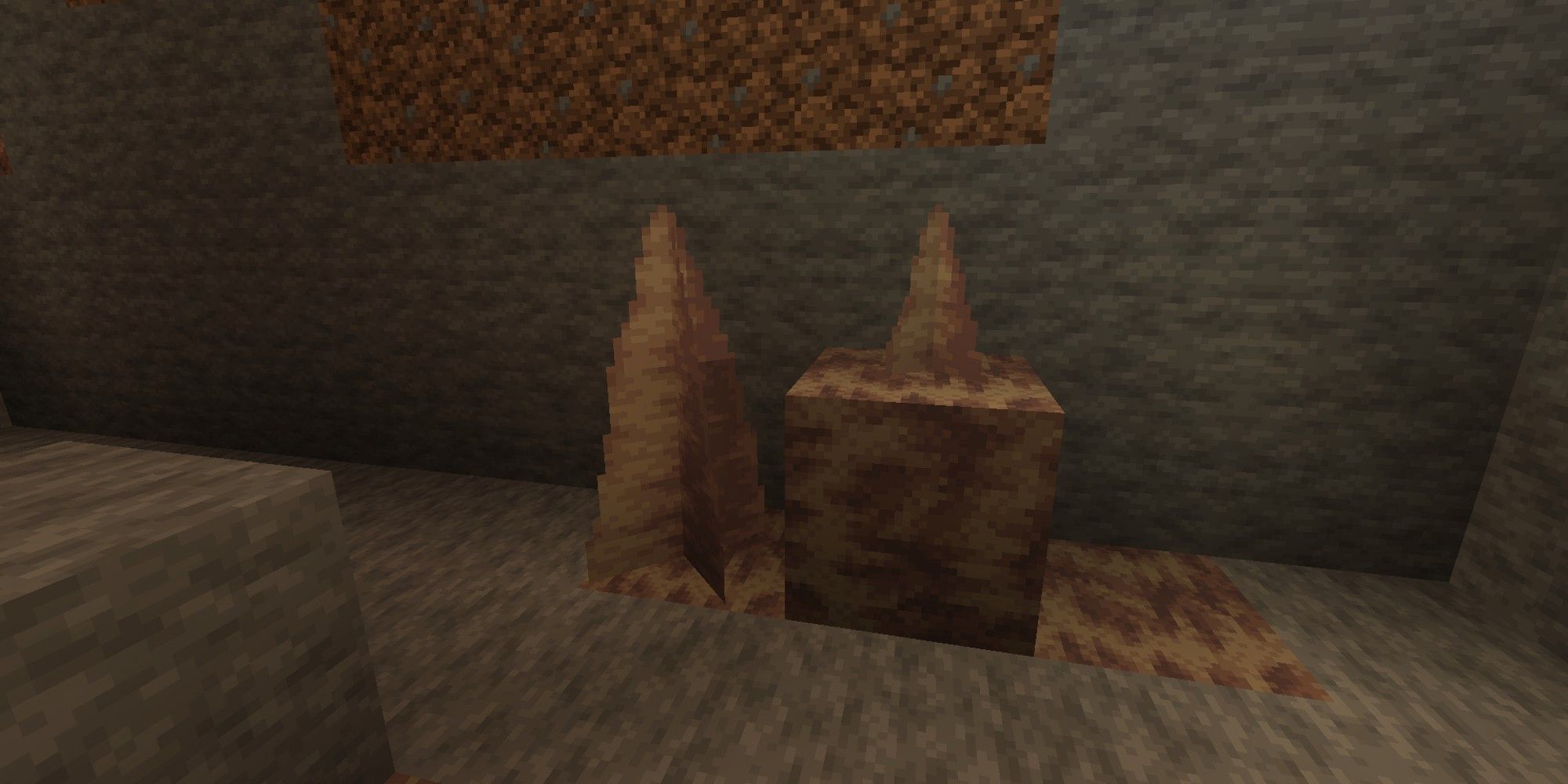 The Caves and Cliffs update has brought a wide variety of new blocks to Minecraft, including dripstone. This unique block has a few variations along with several uses. When first encountering dripstone, you may be a bit confused on what to do with it, but that’s why we are here to help.

Related: Minecraft: Everything You Need To Know About Deepslate Blocks

In this guide, we are going to go over everything you need to know about dripstone, including where to find it and how to use it. First, let’s take a look at where you can find dripstone that generates naturally in the world.

It’s important to remember that the second part of the 1.17 Minecraft update is not out yet; this update will add the dripstone caves biome. Although you can still find dripstone, you will not be able to find this biome just yet.

Where To Find Dripstone

Dripstone can be found within underground caves in clusters, as well as on the bottom of bodies of water.

The pointed dripstone is essentially a stalagmite or stalactite. Similar to these real-life cave features, dripstones can grow facing either downwards or upwards. To quickly and efficiently find dripstone, stick to open caves and ravines, rather than mining through layers of stone. Dripstone can generate around the bottom and top of ravines, so you will not have to do any additional mining. These ravines can be quite dangerous, so be sure to bring plenty of food, as well as a good set of armor.

How To Mine Dripstone

To mine a dripstone block, you need to use any type of pickaxe. If you don’t use a pickaxe, the block will be destroyed.

Pointed dripstone can be mined with any tool, however, it will be quickest if you use a pickaxe.

In addition to finding pointed dripstone throughout caverns, you will also be able to grow your own.

If you have a stalactite hanging from a dripstone block that has a water source above, it will slowly grow over time. Additionally, a stalagmite will grow directly under the hanging stalactite if there is a solid blow within eleven blocks below. In the image above, you can see dripstone growing from the top, as well as forming on the bottom.

This is a great way to get more dripstone. To collect, simply take a pickaxe to the lower row of pointed dripstone.

Overall, dripstone takes a long time to grow. Items in Minecraft grow according to ‘ticks’; an in-game day lasts about 20 minutes, which is 24,000 ticks. Dripstone has less than a .1 percent chance to grow each tick, so this means that it will take a while to grow dripstone. With several stalactites set up though, you should gather a decent amount of pointed dripstone in no time.

There are a few uses for dripstone, so let’s take a look at them below.

With a stalactite and cauldron, you can make an infinite water or lava source. To do this, set up a cauldron with a dripstone block at least two blocks above, as seen in the image above. Under the dripstone block, place a pointed dripstone.

The short answer is yes. If you fall onto pointed dripstone, you will die, with a message saying that you were “impaled on a stalagmite”.

If a stalactite falls from above, you can die as well. This death message will say that you were “skewered by a falling stalactite”. Overall, navigating through areas with a lot of pointed dripstone can be quite dangerous.

Many players have also discovered that falling dripstone can be used to kill the Wither. This is a bit difficult to set up, so be sure to check out this video explaining how it works.

That’s all there is to know about dripstone. This unique block is great for adding detail to any existing builds, so get out there and start exploring!

Next: Minecraft Complete Guide And Walkthrough