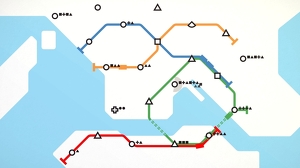 There's a special elegance to subway maps. Much of it is just in the looks: the minimalism and the weirdly playful colours. I look at London's tube map and see a kind of Scandi children's toy. You know the sort – made of wood, a bit tactile, and always passively educational, the kind designed by friendly faces in white coats that do want you to have fun, but also develop very specific parts of your brain while you're doing it. This is also the real elegance of it. Compared to every other kind of public transport map, a tube map is as simple to look at – but it has to have been made by a genius.

This is why subway maps make for a perfect video game, and Mini Metro – now Mini Metro+, with a few enhancements made to it for its arrival on Apple Arcade – is the perfect example. This is the mobile game, simple and clear and immaculately well-suited to the platform. It's what Apple Arcade is all about, selling mobile gaming as something more than a vehicle for toilet-break microtransactions (cleverclogs will tell you it always has been, if you knew where to look, but the volume of guff does make that old attitude forgivable). Bringing it to the subscription service is a sign Apple gets it.

If you're like me, you might have come to Mini Metro backwards, via the also-special Mini Motorways, Dinosaur Polo Club's follow-up urban planner that's been on Arcade for a little while already. Mini Metro is better, I think, just. You'll miss the pastel hues of L.A. or Tokyo, but the Euro-starkness of Metro is a fine replacement. The concept is the same, just with lots of little, structural differences. Rather than going from houses to offices or factories, the little people of this world appear as shapes at stations, which must get to other stations of the corresponding shape. Nowhere is a beginning or an end, for that reason – every station both origin and destination – and a Metro line can technically have infinite length, as opposed to the limited roads of Motorways. The limits here are the number of different lines.