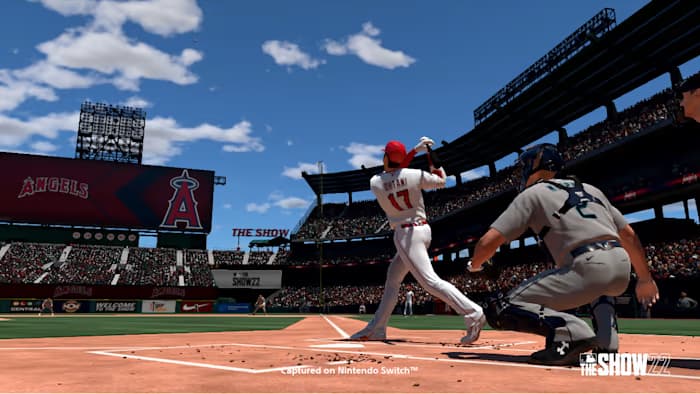 It’s been a long time coming but MLB The Show is finally back on portables. The last time baseball fans were able to play the premiere baseball sim on the go was way back in 2015, which was the last year the series was released on the PlayStation Vita.

The PS Vita version was far behind the PlayStation 3 and PlayStation 4 version by a large margin in pretty much every way but one: it was portable. Back then, it was easy to look past the graphical downgrade and the struggles of trying to play a game about hitting a small ball on a small screen because that was counter-balanced with the massive convenience of being able to play on the go.

The thing is, though, regardless of whether you choose to play handheld or docked, the experience is more or less the same. There’s a noticeable visual performance downgrade from not only PlayStation 5 and Xbox Series X versions, but even last-gen via the PS4 as well. This shouldn’t come as a surprise to anyone considering, you know, the Switch is a last-gen console.

There is some noticeable stutter in-between pitches but to be fair, it does normally clear up when the action starts back up. I didn’t run into any major problems hitting, fielding, or pitching, the Switch would mostly just struggle in cutscenes. Whether I played in handheld or docked mode, it was a serviceable baseball experience, but very far from competing with any other version of the game.

You really should only be putting yourself through this inferior experience if you check at least one of these two boxes. They both should be obvious.

One, the Switch is the only console you can play MLB The Show 22 on. If you’re a Nintendo fan through and through and don’t own a PS4, PS5, or Xbox Series X, then, yeah, this is as good as it’s going to get. Don’t worry, it’s not a horrible experience and it’s definitely better than RBI Baseball, that’s for sure.

Second, even if you have another platform to play MLB The Show 22 on, if you’re really keen on the idea of playing MLB The Show 22 on the go, then it may be worth a pickup. The Switch version, though flawed and inferior, is still better overall than any of the PS Vita versions. Visually, it looks closer to the PS4 version than the PS Vita version ever did, the Switch controls are better than the PS Vita’s, the screen is bigger and easier to see pitches on, and you do have the option to dock it depending on your model.

The real question is whether or not you should pick up the Switch version if you also have access to a current-gen version of MLB The Show 22. In this scenario, which happens to be my own, it’s really a personal call.

There were some years when I was addicted to playing through Franchise, I would have killed for a Switch version back then so I could knock a game or two out of my season no matter where I was.

On the other hand, there were some years when I played a ton of Diamond Dynasty online. There is no way I would willingly choose to play online on the Switch if I had the option to play it on a PS5 or Xbox Series X instead. Playing baseball online is a painful enough experience sometimes even on the most powerful platforms considering how impactful timing and lag are more than in any other sports game. I wouldn’t want to sacrifice any more visual fidelity or performance than I have to.

All that is just to say basically, it’s situational. If you can only choose one, you should probably just go ahead and get the PS5 or Xbox Series X version. But, if you have the luxury of being able to afford a Switch and current-gen version of MLB The Show 22 and can see yourself playing on the go, then go ahead and grab ’em both, you probably won’t regret it.