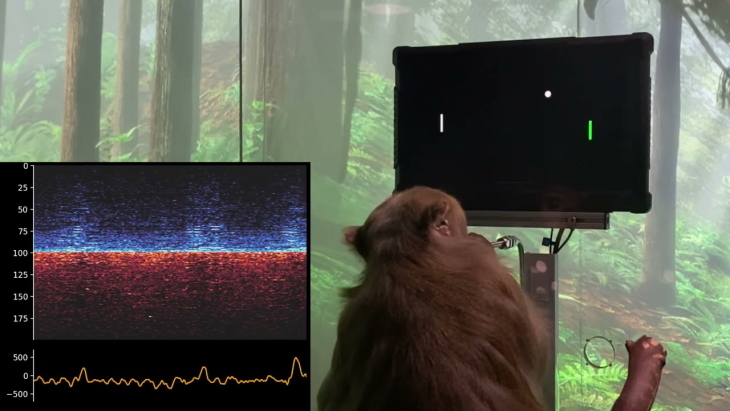 Neuralink scientists and engineers have taught a monkey to play Pong with its mind, using implants translating brain impulses to commands.

The YouTube video, now viewed almost 5 million times, shows a Macaque called Pager playing a game. By moving the analog stick, the cursor moves over the colored square, and he gets a bit of banana smoothie as a reward.

As he does this, activity in the motor-function part of his brain is recorded via the implanted Neuralink microchips, and transmitted to a phone via Bluetooth. This data is then “decoded,” allowing scientists to work out exactly what impulses are given when Pager wants to move his hands in a certain way.

After a few minutes of calibration, Pager is able to move the cursor with his mind. While the analogue stick is unplugged, the impulses from the brain are decoded by computers, and sent to the game.

This is taken a step further, with Pager being able to play Pong– or rather “MindPong”- with no fake analogue stick; purely with his mind. Neuralink also emphasizes that Pager is happy and healthy, playing the game of his own volition.

The goal of the Elon Musk-founded neurotechnology company is to enable those who are paralyzed control a computer or phone with their mind. Since they would be unable to calibrate the device by moving their arms, they instead would imagining hand movements to targets.

The use of video games in promoting hand-to-eye coordination has been proven time and again, and may posses a future in training those with limited motor function to use day-to-day objects, or even robotic limbs in the distant future.

The Neuralink team still have numerous challenges across various fields of engineering, and Neuralink are encouraging more to join their team.