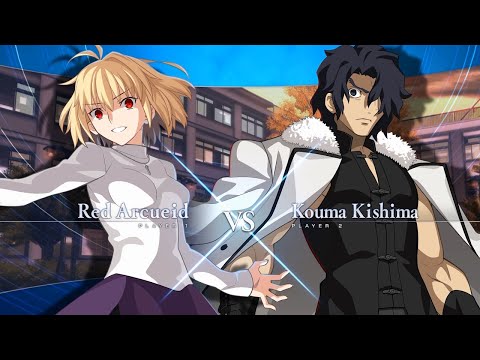 Type-moon released another trailer of its upcoming fighting game Melty Blood: Type Lumina, which will soon launch both in Japan and in the west.

While this trailer displays a full match with Kouma Kirishima vs Red Arcueid. In this particular battle, the former bests the latter and we’re likely to see the opposite soon.

“Due to the effects of coming back from a “certain accident,” her vampiric impulses and overwhelming desires have taken over.

Driven by instinct, she arrives in a lowly human city.

Controlled by pure emotion, her actions and words are quite dangerous, but her underlying personality remains mostly unchanged.

The only big difference is her increased selfishness and changed attitude toward humans.”

“Head of the Kishima clan, a branch of the Tohno family. He is half demon.
Even among mixed-bloods, his demon blood is strong, making him only barely human.
Usually very quiet, he chooses to live as a hermit in a remote area of the mountains where he seeks to achieve spiritual enlightenment.

Because of this, he often speaks of worldly ties and spirituality.
His demeanor in battle, however, reflects his innate strength and demon blood.
His ability to use Scorching Heat means those in his way are often burned to ash.”

Melty Blood: Type Lumina will release worldwide on September 30, 2021, for PS4, Xbox One, Switch, and PC via Steam. you can check out the original announcement, an earlier trailer, plenty of screenshots, the introduction of Shiki Tohno, that of Kouma Kishima, the video focusing on Arcueid Brunestud, the trailer showcasing Ciel, the promotion video for Akiha Tohno, the video focusing on Hisui, one on Kohaku, one showing off their tag team, the reveal of Miyako Arima, the announcement featuring Noel, that of Michael Roa Valdamjong, the introduction of Vlov Arkhangel, and the reveal of Red Arcueid.

We also got more gameplay videos featuring matches between Shiki and Ciel, more showing Akiha versus Arcueid, another pair featuring Hisui vs. Kohaku, and one showcasing Noel vs. Roa.