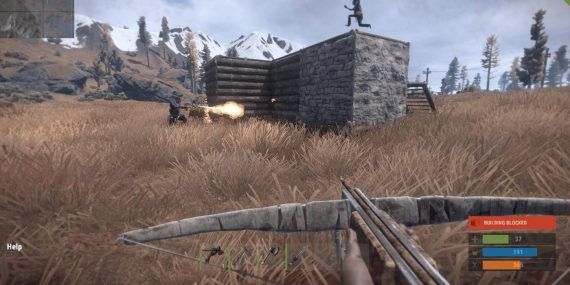 Out of all the major online open world games available, Facepunch Studios’ well-crafted Rust is probably one of the most difficult. There are top tips to help players get ahead in the survival game, which is often fraught with peril, either from the game’s wildlife, or from the other players who drop into the world. Outside of crafting and surviving, the game doesn’t have much direction. However, that’s all about to change as players will now be able to complete missions.

It seems as though Rust is about to offer more than just avoiding death and building shelters, as the latest iteration of the game will give players the opportunity to take on structured quests that are doled out by NPCs. According to the developer, missions will be available at safe points, which are areas in the map where combat is discouraged, and each will have a different task to complete. Quests could involve hunting sharks, catching fish, finding treasure, or gathering resources. Missions will also be repeatable as well, according to Facepunch.

On top of that, players will be rewarded once they complete missions. Rewards will be in the form of scrap metal which is an important commodity in Rust, as well as treasures. Currently, missions will be quite basic, but the studio says it will be working on them to expand them and possibly make them more substantial. It certainly sounds like there is going to be quite a lot of potential in this new feature, which will likely give players a bit more direction.

The game is being tinkered with on a regular basis, with lots of new content being added. Recently, Rust received the “underwater” update, which not only improved the oceans themselves, but also added the aforementioned sharks, as well as the opportunity to find procedurally generated labs under the sea. The update also brought with it two new submarines, and also some bug fixes as well, as all good patches do.

Released in 2018, Rust has become one of the most popular survival games, sitting alongside the likes of 7 Days to Die, Dying Light, and The Elder Scrolls Online. It’s not exactly one for the fainthearted, either. Its toughness is quite infamous, and although other players can be the perpetrator of such brutality, the game as a whole is often harsh and unforgiving. It’s unlikely that this difficulty is going to let up in the update, but at least it will give players some new tasks to be getting on with.

Rust is available now on PC, macOS, PS4, and Xbox One.

MORE: Rust Console Edition: Where To Find Every Item You Need