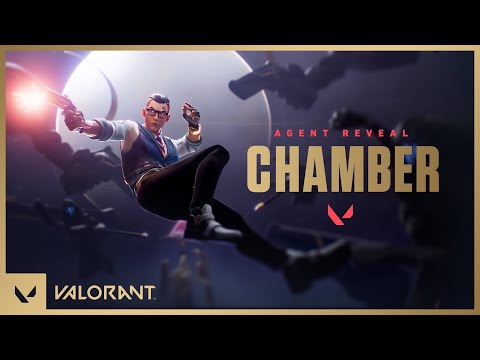 After numerous teasers since as far back as midway through this year, which in turn led to all sorts of speculation about a new Valorant Agent codenamed Deadeye, Riot Games has finally officially unveiled the latest addition to the roster. He’s called Chamber, and he’s a sentinel with some unique abilities that we’ve not yet seen before in the game.

As usual, Riot has prepared a cool cinematic trailer to introduce the character and tee up some of the lore that has led him to become a member of Brimstone’s team. Check it out:

As for the specifics of his abilities, here’s a full overview:

Riot has also revealed a quick look at his gameplay, too, which you can see below.

Ready for the upcoming Sentinel Agent? Here’s a little glimpse at what Chamber brings to the scene. pic.twitter.com/tbRVQRPmPU

Finally, a press release sent to Twinfinite features some comments from John Goscicki, the character producer from Riot Games who led development on Chamber. Here’s what he had to say about the Agent’s design:

What were your goals when designing Chamber?

“We started by thinking about different ways to approach the Sentinel role. Early on, our thought process wrapped around the idea of “someone that bunkers down, and holds a location by getting frags.” As we worked on Chamber, the evolution of someone who can hold down a site with an array of weapons emerged. Between your loadout, his pistol/ult, and gadgets, a player should be able to hold down a location.”

What did you take inspiration from / any notable concepts you wanted to convey with Chamber?

“We took a lot of inspiration from the archetype of “the gentleman assassin.” As we dove deeper into creating Chamber, it became clear that his gameplay revolved around highly lethal, pinpoint accuracy. That feeling was the core of his thematic: the idea that the distance of the shot, the breeze in the wind, the type of powder in the ammo, all these fine details must be taken into account to land the perfect hit. A person like that would care about the finer things in life as well.”