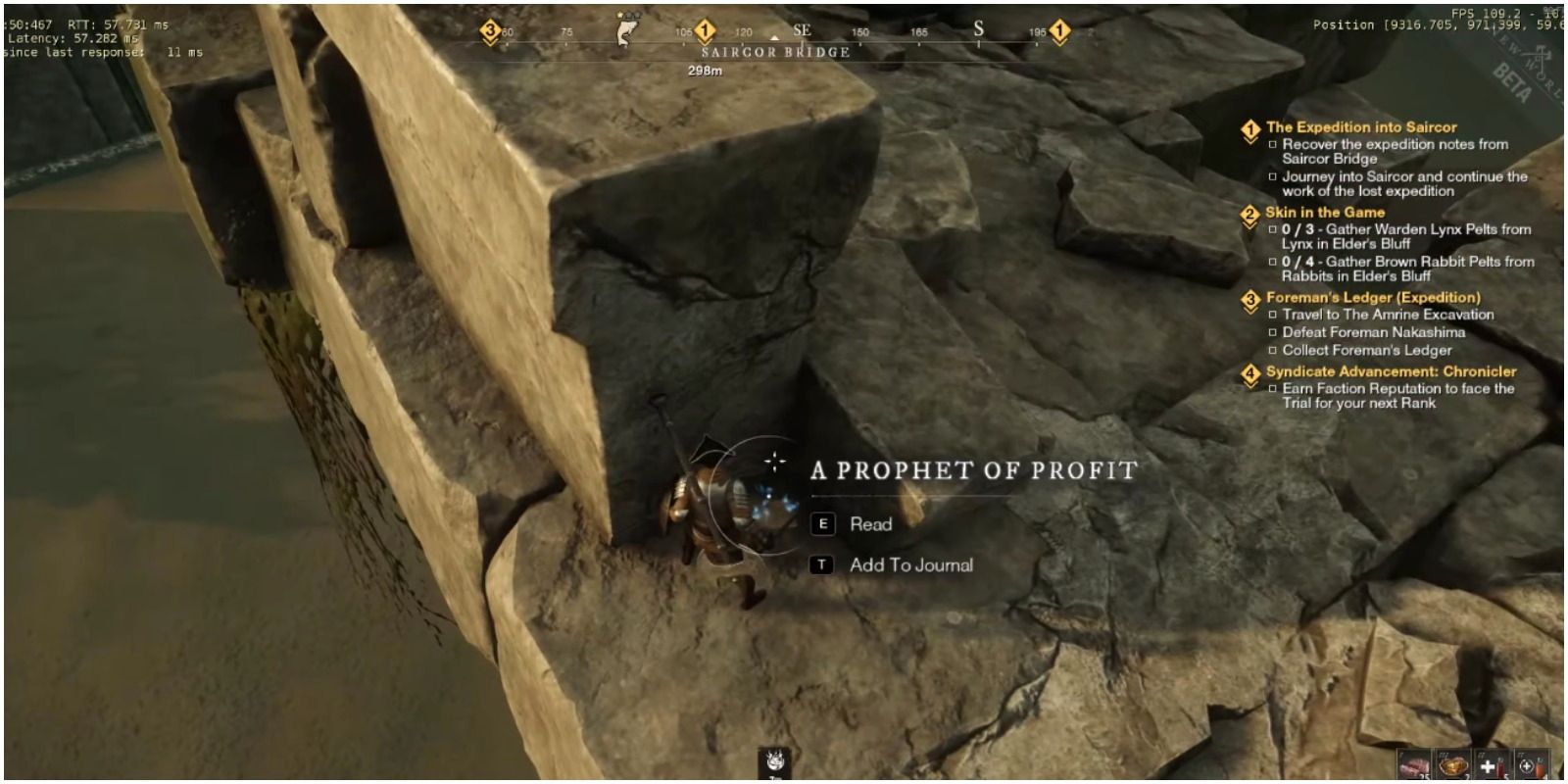 Some quests are worth quite a lot of rewards, so players should definitely seek to do as many of them as possible in New World. One such adventure is called “The Expedition into Saircor”, which can be picked up from Gladis Bond in the First Light Settlement around Dayspring.

This quest will not take players very long, as it’s one of the more straightforward ones, plus, players will not need to travel very far to accomplish the tasks set about by magistrate Bond. Just be prepared for a bit of combat with level 20 enemies before setting forth on this New World quest.

The first leg of this quest is to head northeast from the First Light Settlement until one reaches a huge stone bridge. This structure is Saircor Bridge and it is where one will find the first expedition note needed to progress this quest. Players will need to scan the area carefully, as the expedition note, labeled “A Prophet of Profit”, will be tucked away behind some large stone bricks.

RELATED: New World: How To Forge Your Azoth Staff

After reading the note, one’s quest will update to the objective of now entering Saircor properly in order to continue the work of the lost expedition.

Upon entering Saircor after crossing the bridge, players will notice that there is one main path leading into it. Follow the quest marker through the ruins until one comes to an outdoor square dais with a short staircase leading up to it. Next to the right side of the stairs will be the next expedition note, this one titled “Misguided Anthropology”.

After reading this note, the log will update to the final objective of this quest. Players must now track down a Tutelary Regent in Saircor and defeat them to obtain an Ancient Clay Statuary.

Thankfully, the Tutelary Regent won’t be very far from where one found the second expedition note. Travel southwest and ascend the outside of what seems to be an ancient temple to confront the Tutelary Regent, who will be waiting at the top of the stairs.

They will be backed up by skeletal minions, so don’t let one’s guard down and be prepared to dispatch some relatively weak lackeys. Apart from trying to swarm the player with their underlings to keep them occupied, the Tutelary Regent will continuously back away and try to hurl spears at every opportunity. Be sure to fight smart and block incoming ranged attacks in between striking down the skeletal minions, as the Tutelary Regent can do some major damage if they are allowed to charge up their spear-throwing attacks.

However, after the Tutelary Regent is defeated, they will drop the desired Ancient Clay Statuary, as well as some other goods, and the quest objective will be updated. All that’s left to do now is head back to the First Light Settlement near Dayspring and speak to Gladis Bond to turn in the quest.

Step 4: Completing The Quest & Getting The Rewards

Traveling back to the First Light Settlement will allow one to turn in the quest by speaking with Gladis Bond. After learning what happened to the lost expedition, Bond will reward the player with some great loot.

Quest Completion Rewards For The Expedition Into Saircor

Be sure to keep up with Gadis Bond, even after completing this quest, as she will have plenty more opportunities for the player. Here are all of the quests the player can pick up from this magistrate in the First Light Settlement (including this one):