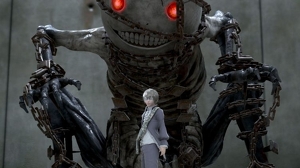 Because of the absolute state of game reiusses, I have to explain what Nier Replicant is before I can tell you how it is. Nier, developed by Cavia, released in 2010 in two versions – Nier Replicant for the Japanese market and Nier Gestalt for western territories. Both are almost identical, save for their protagonist. The west got “Dad Nier”, an adult man with an Ikea wardrobe somewhere in his family tree, and Japan got a young man instead, out of the concern that the older lead wouldn’t appeal to Japanese audiences.

Both protagonists have the same goal, saving Yonah, who is either their daughter or sister, from a mysterious illness called the Black Scrawl. Nier Replicant ver. 1.22474487139… brings the Japanese version to the west for the first time. The version number, the square root of 1.5, means to tell you that this is neither a remake nor just a remaster, it’s somewhere in between.

Nier Replicant begins with a scene in which protagonist Nier tries to defend his sick sister Yonah from a large number of encroaching monsters called Shades, before an abrupt timeskip takes you over 1000 years into the future. The young man you control now shares his name with his counterpoint from the past, and he too has a sick sister he wants to save. Before you can find out how these two things are connected, you have to follow a rudimentary JRPG story for around ten hours.