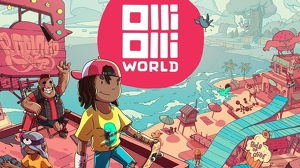 OlliOlli, it's an absolute delight to say, is back. Developer Roll7's superlative skate series is making its return with OlliOlli World, coming to Switch, PlayStation 4 and 5, Xbox Series X/S, Xbox One and PC this winter courtesy of publisher Private Division. From what we saw in today's Nintendo Direct Indie Showcase, it boasts all the spark and flair I've come to associate with the studio most recently behind 2018's Laser League.

It's certainly a bigger, bolder game than anything Roll7's attempted before, and the most obvious first point of order is how it brings the series into lavish 3D, and into a fully-realised, fuzzy-edged Adventure Time-esque world of pastel colours and wholesome character. Radland – as OlliOlli World's setting is known – looks like the sort of place you'd happily poke around for hours on end, which gets to this sequel's other bit of business.

"The other pillar of OlliOlli World [alongside the move to 3D] is how can we make it more welcoming," says Roll7's creative director John Ribbins. "Can we make it as rewarding to play at a high level when it comes to chasing scores, but also can we make it something my mum could play as well? Like if I gave her the controller, could she actually get through some of the levels and enjoy it?"