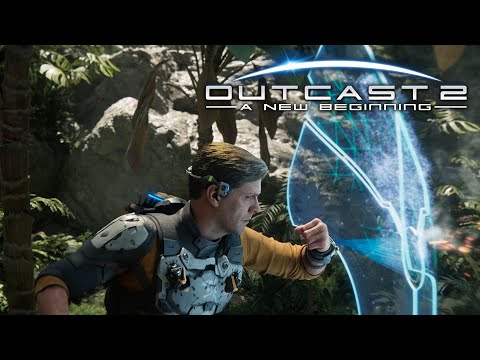 In 2019 THQ Nordic picked up another IP to add to their collection, the 1999 shooter Outcast, created Belgian developer Appeal and originally released by Infogrames. A remake of that game, Outcast: Second Contact, landed on consoles and PC last in 2017 but was decidedly average, scoring 5/10 in our review.

THQ nabbed the game off the original three creators rather than another publisher, presumably the rights for the IP reverted back to them at some point in the last twenty years. A sequel, Outcast II: The Lost Paradise, was in production at Infogrames but was left uncompleted when the company went bust. Now, twenty two years later, there will be a sequel and it’s coming to PS5, Xbox Series X|S and PC only. Destroy All Humans 2 was also only announced for new consoles and PC, THQ Nordic seem to be moving on from PS4 and Xbox One.

Cutter Slade is back to fight the robots but this time he is on a new planet, Adelpha, home to the Talan people, which looks rather like the one from James Cameron’s Avatar. “The lush but dangerous planet is at risk of exploitation and destruction from an invading army,” say THQ Nordic, “The task at hand is dead serious – but that won’t stop Cutter from cracking some jokes… and skulls.”

You can watch the gameplay trailer below.

The game is being developed by Appeal Studios who were behind the 2018 remake. The team making the game includes a number of people who created the original including the game director, art director, and composer.

The game does not currently have a release date but is “coming soon”, and it must be quite soon as the pre-orders are already up.

Are you looking forward to this very long awaited sequel? Let us know in the comments!