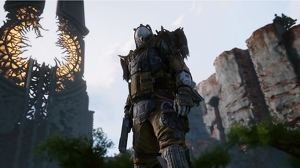 Outriders certainly has some worrying issues – the terrifying inventory wipe bug chief among them. But those who are soldiering on with the endgame have found a useful method to the madness: punching.

Punching – or, to give it its proper name, melee – is an ability I barely used during my playthrough of the campaign. But players have found it is a powerful tool in Outriders' brutally-difficult endgame, and can be a potent option even when playing solo.

Even more interesting, the melee skill – and the melee builds that have emerged around it – is most powerful with the much-maligned Devastator class. This class is ostensibly a tank that some Outriders players are kicking from random co-op groups because of a perceived lack of damage per second potential during Expeditions, the endgame missions that revolve around completing the map as quickly as possible.