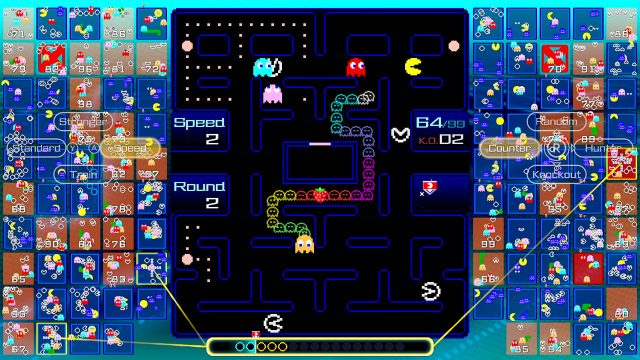 Compete against 99 players once again in PAC-MAN 99. Like Tetris 99, you and 99 other players will battle to be the last players remaining. In classic PAC-MAN, the goal was to eat pellets and avoid ghosts. Eating large pellets allows you to eat ghosts. Now, eating ghosts sends them to bother other players as “Jammer Pac-Man.” Jammer Pac-Man chase after your opponents and reduce the opponents’ speed if bumped into. Another new aspect are the “sleeping ghosts.” Stationary, unmoving ghosts that can be eaten to create a long train of ghosts that will send even more ghosts at enemies. In Tetris 99, players could choose who they sent blocks to, which is a returning feature but with Jammer Pac-Man, but now players will also have power ups to choose from such as a speed boost.

PAC-MAN 99 is out now! A service to only Nintendo Online members. Additional paid content will also be available.

Some Nintendo players have voiced complaints on the now mulitple battle royale games, while others feel that though the game looks fun, it doesn’t make up for Nintendo taking Super Mario Bros. 35.

What do you think? Are you happy that Nintendo is giving attention to some of the classics? Are you getting tired of battle royale or is this a perk for Nintendo Online members? Is PAC-MAN 99 what we need after losing Super Mario Bros. 35 or is it too soon that it feels like Mario is getting pushed to the side?

The post PAC-MAN 99 On Nintendo Online Out Now appeared first on Nintendojo.