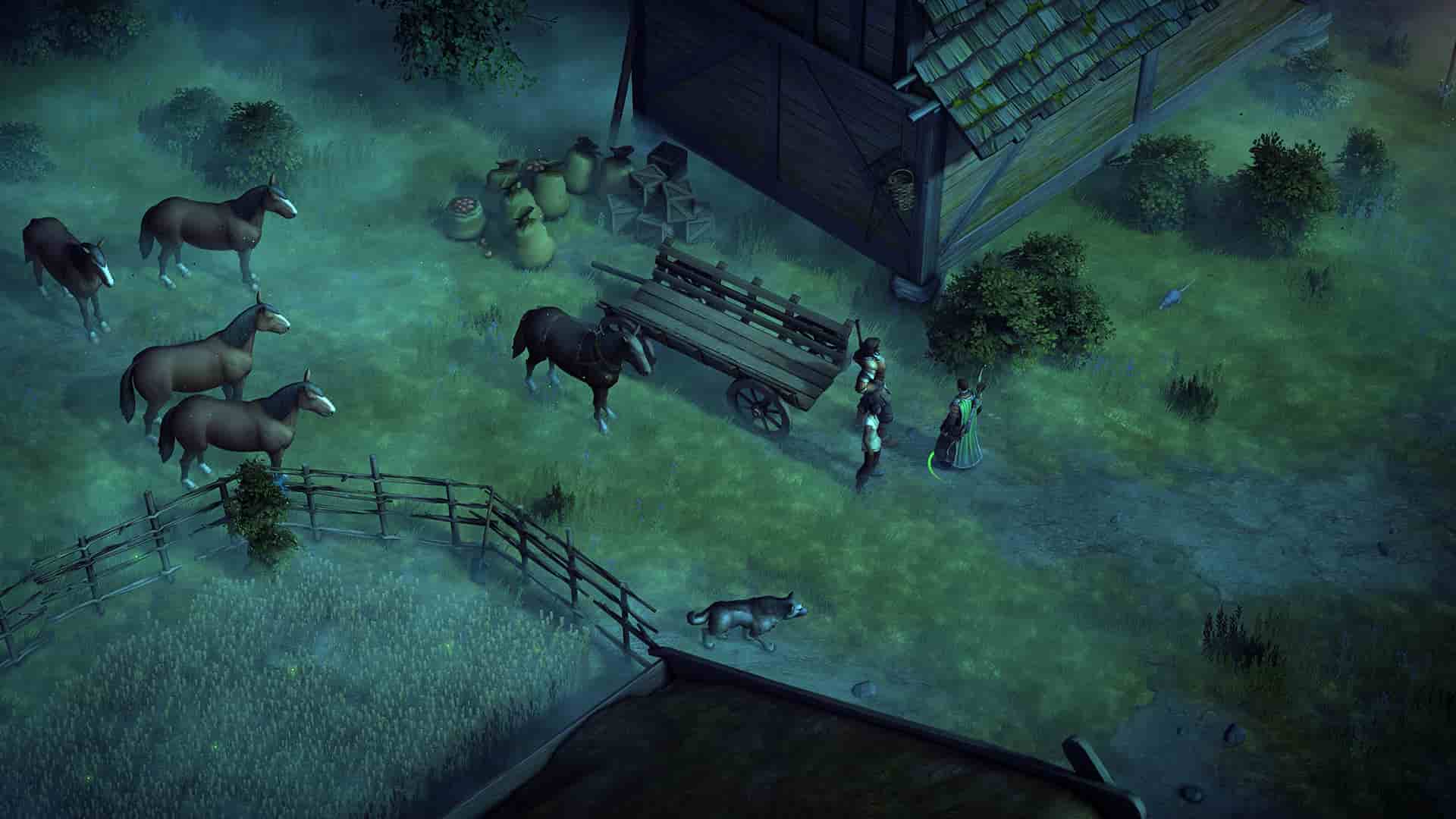 Pathfinder: Kingmaker – Definitive Edition seems like the perfect game to play when stuck at home during a pandemic. Owlcat Games has gone out of their way to deliver an authentic pen and paper RPG, and for the most part, succeed with incredible writing and in-depth gameplay. However, Kingmaker also feels like two games in one, with the second part not fitting in so well in the overall product.

Create Your Own Path And Rule The Stolen Lands

Pathfinder tells the story of a hero who is recruited along with many others to defeat the Stag Lord, a bandit leader who has claimed the Stolen Lands as his own. Your reward for defeating the Stag Lord? Being named the new Baron or Baroness of The Stolen Lands.

After a surprise attack by the Stag Lord, you band together with others hired to defeat the Stag Lord and set off to find the bandit leader and claim The Stolen Lands for yourself. This isn’t the entire story; in fact, it’s just a small portion, although it still took me about ten hours to complete. This is how massive Kingmaker is and the amount of content available here can easily last you over 150 hours.

The story is a simple concept but of course, not all is what it seems. Kingmaker does an amazing job of expanding its world and introducing fantastic characters. The story at times feels very political and can get pretty difficult to follow when it starts to deal with too many factions and characters looking to take The Stolen Lands for themselves.

A Fantastic Adaptation Of A Pen & Paper RPG

Owlcat Games recognizes that the Pathfinder license means the world to its fans and delivers one of the most faithful adaptations of a pen & paper RPG I’ve ever experienced.

One of the biggest joys of Pathfinder is creating your character. It’s almost like raising your own child in the image of what you want them to be. Just like in the pen & paper RPG, Kingmaker offers you over a hundred different skills and abilities to learn and unlock.

Mixing up different classes to make the character you want is a blast. Ever wanted to make a Barbarian/Rogue? You can do that, and while it’s probably not the best combination to have, the fact that it’s doable is what’s so amazing.

Those who know Pathfinder will be right at home when it comes to creating a character but for those who may have never attempted a P&P RPG shouldn’t be so discouraged, as Kingmaker offers preset characters for players to choose from. These characters will have preset skills and stats already selected for them, so it saves you the trouble of having to figure out what skills are good for a specific class and what is absolutely useless.

Another aspect that Kingminder excels at is the customization options. Every aspect of the game is customizable, from the difficulty of enemies, automatically leveling up, character weight management, and most importantly, fortress building. There are so many options you can literally play the game however you want and not have to worry about other aspects of Pathfinder that some may find troublesome. Think of them as house rules that some people may make up while playing at home.

An In-depth Combat System With Plenty Of Options

Kingmaker is split up into two major gameplay modes. The first is exploring, completing quests, and slaying monsters. The other comes from managing your own kingdom.

The world map will have you sliding a pawn piece on a certain path. On your path, you may encounter ambushes and new locations to explore. Kingmaker features two types of combat mechanics, Real-Time or Turn-Based which you can switch between on the fly with the press of the R3 button.

In real-time combat, all characters will attack based on their AI preferences and utilize the best skills and abilities when needed. For the most part, this is the best mode to play through the game when facing the easier challenges, but the turn-based combat is where things really shines.

Utilizing the turn-based combat, you have full control of what each member of your party does and where they go. It’s incredibly important to position your party members depending on where they can be most effective. If you have a Rogue you may want to place them behind the target they’re attacking to get the “Back Stab” damage bonus that Rogue’s are so well known for.

What’s not so fun is exploring. Most locations are very small and don’t offer much in the form of loot, and due to this I saw myself going from loading screen to loading more often then I would have liked. When it comes to loot, most of the time you’ll find the same armor and weapons that just take up space in your inventory, which will then lead to you being over cumbered slowing your movement.

What makes it worse is there is no easy way to drop items you don’t need. There isn’t an option to select all the junk you have and drop it, you have to do it one item at a time.

Kingdom management is where I feel the game falls short. The idea is awesome, having your own kingdom, building and upgrading it, disputing over new land, and sending an envoy to dispute prices on goods and trading.

A lot of the busy work comes in sending your advisers and envoys to deal with problems. If they aren’t up to the task you’ll have to deal with some serious repercussions. Because of this, I was forced to make a new save after every decision I made just so I wouldn’t lose to much progress if I failed. Sometimes I won’t even fail because I wasn’t up to the task. I would fail because I simply ran out of time to deal with an issue because it didn’t seem that important at the time.

Kingmaker has a day and night cycle and a lot of the Kingdomes issues take a certain amount of days to fix. If you aren’t paying attention you’ll run out of time to complete a certain task and get a game over screen.

Another reason the Kingdome management hurts the essence of Pathfinder is that it doesn’t allow you to rule based on the character you have chosen to be. You can’t rule with an iron fist because your subjects will rebel against you leading to a game over. As such, this means you can’t truly be the Chaotic Evil character you’ve been playing the entire game.

Thankfully, you can turn it all off. If you head to the game’s customization options, you can simply turn off the Kingdom management aspect of the game if you want and have it all automated. Even better, if you set it to automatic you can never get a game over screen, allowing you to simply go and enjoy the RPG portion of the game. Just be warned that once you change to the automatic option you can never set it back unless you restart the game with a new save file.

The amount of voice work in Kingmaker is astonishing, and almost every major scenario is voiced. The voice acting is also pretty solid, while the soundtrack is just what you would expect from a fantasy setting, if nothing too spectacular.

Kingmaker is an isometric RPG, so graphically I feel the game could have used a little more polish especially heading into the end of the console generation. The spell effects on the other hand are fantastic; seeing a fireball explode and fry a group of enemies is quite impressive on the eyes.

Unfortunately, Kingmaker suffers from some serious performance issues. For starters, the game is very unresponsive. I constantly had to push the confirm button multiple times just to get the response I wanted. Switching menus also became a problem when the game wouldn’t register my button press and then skips over the menu I was trying to select. It’s worse when it happened as I was making a manual save and ended up overriding a save on accident.

The other major problem is the frequent game crashes, to the point where I thought something was wrong with my PS4. Kingmaker crashes about every hour or from what I experienced, once every five to six loading screens.

Pathfinder: Kingmaker is one of the most excitingly frustrating games I’ve played in a while. Kingmaker is incredibly faithful to its source material down to the smallest of details but it also falters by being a building simulator. which will have you seeing the game over screen more often than you would ever want. Add in the frequent game crashes, and it becomes a frustrating experience.

Pathfinder: Kingmaker – Definitive Edition is now available for the PS4