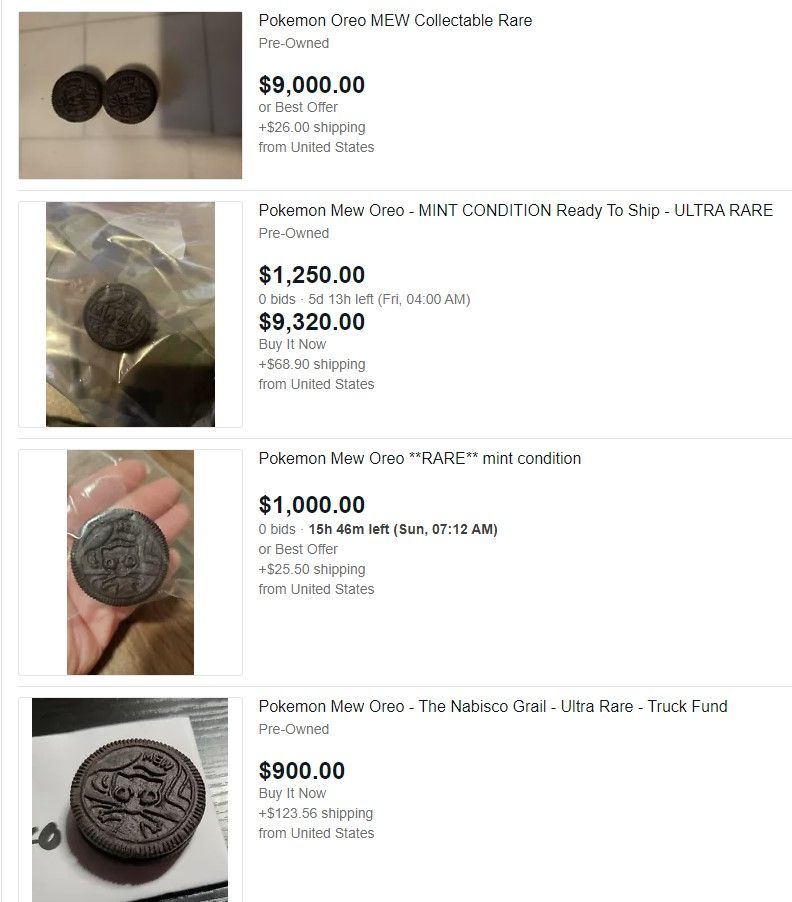 Scalpers. They truly are the bane of anyone trying to get their hands on any limited physical release. Whether it’s graphic cards, Pokemon cards, or next-gen consoles, they’re just waiting to buy up the inventory and sell it to you for a huge markup. It now seems that they’re not averse to doing the same for perishable items either. Some scalpers have stocked up on Pokemon x Oreo limited edition cookies and are reselling them for thousands of dollars.

If you head to eBay right now, you’ll notice a number of sellers trying to pawn off these cookies for anywhere from $50 to $9000. That’s right, one seller is trying to sell one ‘rare’ Mew Oreo for $9000. Considering the number of listings there are, it doesn’t look like the Mew Oreo is all that rare. Some sellers have even encased the cookies to make them last longer. Fortunately, it doesn’t look like anyone is falling for it, and these scalpers will just end up with stale cookies.

As part of its 25 year celebration, The Pokemon Company has been collaborating with artists and companies from various industries. Earlier this year, Original Stitch announced a line of Pokemon dress shirts, Katy Perry released a song called ‘Electric’ featuring Pikachu, and the original TCG cards also got a reprint.

In June, Oreo teased that it would be collaborating with Pokemon in some way, and the result was the Pokemon x Oreo limited edition cookies. These cookies feature one of 16 Pokemon embossed on the top biscuit, but you won’t know which ones you’ll get until you open the pack; almost like TCG. Scalpers took notice of this and saw an opportunity to make a buck.

Nabisco, the maker of Oreo, saw employees go on strike for several weeks in protest against new company policies. New rules proposed by parent company, Mondelez International, would see changes in shift lengths and overtime rules which weren’t in favour of the employees. Members of the Bakery, Confectionery, Tobacco Workers and Grain Millers International Union went on strike to oppose this proposition, but are now back to work after an agreement was reached between the two parties.

NEXT: We Need A Pokemon Game Set In Alto Mare ASAP