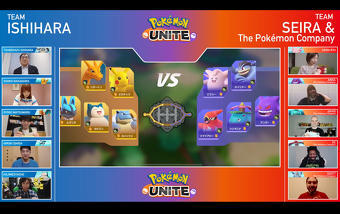 A five-versus-five team battler, it sees squads of players with their own Pokémon battling it out in an arena dotted with control points on various lanes.

As your Pokémon level up and evolve, they’ll gain new moves – some unique to Unite which can deal damage to multiple Pokémon nearby. The aim is to hold as many of these as possible, scoring points, before time runs out.

Pokémon and Tencent announced their partnership almost a year ago, with word that the pair would work on new games. There was no word today on when Pokémon Unite will launch.

TiMi is the experienced studio behind colossal mobile hits such as Honor of Kings and Arena of Valor, as well as Call of Duty: Mobile.