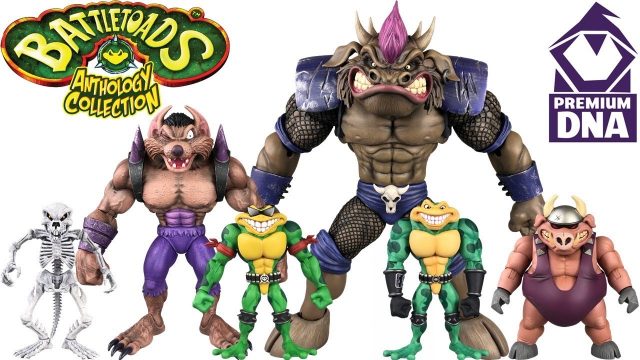 There are toys and then there are Premium DNA Toys. The latter are some highly detailed, intricate, and expensive collectibles that will make the average person’s wallet shudder in horror. In this case, Battletoads Anthology Collection Wave 1 is one of the most primo lineup of action figures that has come along this writer’s desk in a long while. Fans of the NES classic will really get a kick out of these, especially the care that’s been given to the characters beyond the toads themselves.

Seen @ToysDna‘s fancy Battletoads figures? The ‘Toads have in-scale interchangeable attachments, General Slaughter is 15″ tall and the figures have more articulation points combined than there were Pokémon in 1998! Interested? You can pre-order ’em here: https://t.co/A3BTGxsBmr pic.twitter.com/ms2j9GBdHm

The lineup, which will launch Q4 of this year, consists of the following:

It’s possible to pre-order the complete set for $364.99, which saves around $15. Of course, if you’re spending $364.99 on action figures, that $15 of savings might not be all that important. Not that we’re judging; anyone who has the cash to snag these exceptionally cool action figures will leave us rife with jealousy. Pre-order here (until 05.15), and then let us know down below whether or not you’ll be among the select collectors to own these!