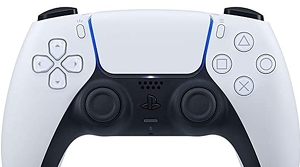 Sony issued an update to the PlayStation 5’s DualSense controller this week, and reports indicate it has improved the rumble effect for PlayStation 4 back compat games.