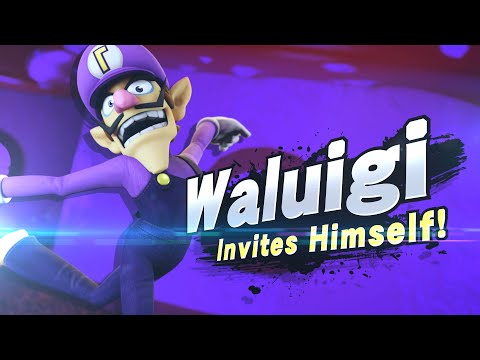 Believe it or not, but there's now just one slot left to fill in the second Fighters Pass for Super Smash Bros. Ultimate. The game's director Masahiro Sakurai has also reiterated how this really will be the last character to join the battle.

While it's still unclear who exactly the final fighter will be, there are obviously a lot of players out there hoping to see a Waluigi reveal. While there's absolutely no guarantee something like this would necessarily happen, it hasn't stopped fans from imagining what Waluigi's addition to the game's roster might look like.

We've even seen mods such as Project M (based on Super Smash Bros. Brawl) go as far as adding Waluigi as a playable character, and now the YouTube channel King Bob Gaming has taken it one step further with a rather emotional reveal trailer for Waluigi, who in the end decides to invite himself to the battle…

Back in 2018, the president of Nintendo of America at the time, Reggie Fils-Aimé, mentioned how Sakurai was well aware of the support for Waluigi and noted how the decision-making was up to him. Although, in more recent times, we've heard from Sakurai himself how Nintendo has a "larger" say in this process, and his own "preferences" don't really play a role in the selection process.

And then there's the theory that Waluigi will never join the battle as a playable fighter, simply because he's already an assist trophy in the game. Still, that didn't stop Min Min, who was a spirit prior to her fighter debut in Ultimate – so unwritten rules like this can always change.

We've had so many different characters and series join Smash over the years from Steve and Alex from Minecraft to Kazuya from Tekken. Could you see Smash Bros. Ultimate going out with a bang by adding Waluigi as a playable character? Anyone else you would like to see? Leave your own thoughts and theories in the comments below.