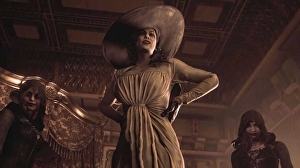 Resident Evil Village arrives in exactly two weeks, on 7th May, and Capcom is attempting to stoke enthusiasm for its release with a needlessly convoluted demo roll-out that continues this weekend on PS4 and PS5 with a trek into Castle Dimitrescu. Consider this a reminder!

As it announced last week, Capcom is spreading its Resident Evil Village demo over three weeks – but which bits you get to play, when, and for how long depend entirely on your platform of choice. Last weekend, for instance, saw Capcom opening the gates to Village’s, er, village for a total of eight hours on PlayStation 4 and PlayStation 5 – although participants were only actually allowed to explore the demo for 30 minutes.