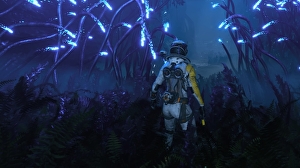 There’s been understandable concern recently about Sony’s reported obsession with blockbusters that are too big to fail – the God of Wars, the Horizon: Zero Dawns and the god-forbid-it’s-real The Last of Us remake – so it’s quite remarkable how Returnal has arrived within mere weeks of the story like some kind of rebuttal. This is one of the most daring, dazzling and straight-up different big ticket games to come from Sony since Death Stranding.

Is it any good? After half a dozen hours scrambling through a game dense with systems and mystery it’s hard to say. Is it interesting? Abso-fucking-lutely.

How does Returnal work, then? It’s a roguelike at heart, built around a moody sci-fi time-loop premise that sits neatly with the genre staples – die, die and then die again, all while an unknowable alien world rearranges itself each time out. The loop’s as snappy as others of its ilk, the underlying risk/reward making everything agreeably intense. Chain three enemies together and you’ll gain an adrenaline level that’ll grant you a status effect; chain another three and you’ll stack another effect again until you max out and can make the screen explode with the press of a button – take a hit, though, and you’ll go back down to zero.