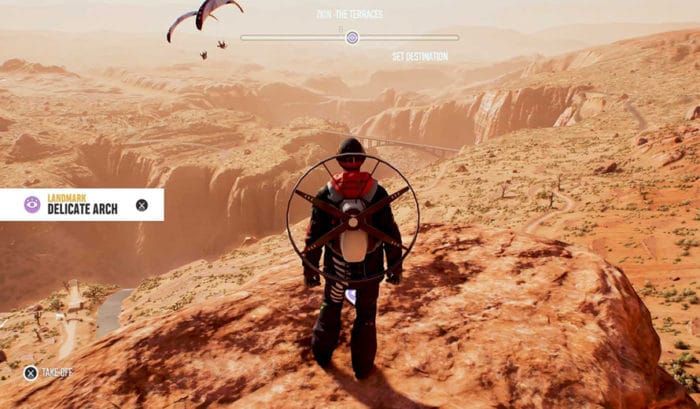 Ubisoft Annecy has taken 2019’s Steep and used it as an appetizer of sorts, making a multicourse meal out of that game’s snowboards, skis and wingsuits and adding mountain biking and rocket suits to the mix of extreme sports. It takes many of America’s national parks and blends them into a huge, real-world-geography-be-damned, seamless map of mountains, forests and deserts that is chock full of landmarks, collectables and thousands of AI and real players exploring, racing and out-tricking one another.

There are two primary ways to experience Riders Republic, not necessarily of equal value. There is an offline Zen mode that allows you to simply use the immense map as an endless playground, instantly and improbably switching between sports and modes of transportation at the press of a button. Thanks to the impressive environments it’s easy to get lost for hours in aimless wandering, but the downside is that to earn better gear or cosmetics you need to be online and in the career mode. But, if you’re allergic to the games as service model at least you have some sort of alternative.

The price of admission to the online/career mode — which is where most of Riders Republic’s content resides — is a tutorial that might just be the most cringe-worthy hour in videogame history. It’s so absurdly full of bro-y, extreme sport cliches and exaggerated characters that you assume it has to be a parody. One of the minor but consistently off-putting things to me about Riders Republic is how it keeps whooping and hollering at you about how EXTREME and FUN everything is. Cut back on the Red Bull already. We get it. You’re excited, and Red Bull is a sponsor. Also, telling me how much fun I’m having doesn’t make it so.

The tutorial of course serves a legitimate function, especially to players who weren’t into Steep, by introducing controls for the main sports and outlining the premise of the flexible career mode, which is basically to complete a series of events in all the eventually unlocked sports (or at least your favorites) that culminate in the grand finale mega-race. The career mode spans dozens of hours, consisting of main and secondary race events or time trials that are repeatable, and always against AI opponents. They do a great job of both honing skills and pushing players around the map and through the various sports, some of which may click with you more than others. Like a parent deathly afraid of their child having a moment of low self esteem or failure, Riders Republic rewards players for just just about everything. Complete a race, no matter how far in the rear of the pack you land or how few tricks you nail, and you get a star. Good job, Broseph!

Earning stars allows you to unlock new and better equipment, finally leading to epic tier gear that significantly ups your game. I think I would have enjoyed the ability to, let’s say, upgrade my basic mountain bike with better components. But that would have pushed Riders Republic into simulation territory, when it’s really an arcade game at heart. Although all the sports use physics in a relatively realistic way, controls — at least once mastered — are pretty forgiving and even the worst crash can be shaken off. There is no damage modeling, either to equipment or human bodies. Riders Republic is all about what it feels like to bomb down a mountain or do endless midair tricks, without any of the worry, technique or potential hospitalization that accompany the real thing. It’s fantastic. 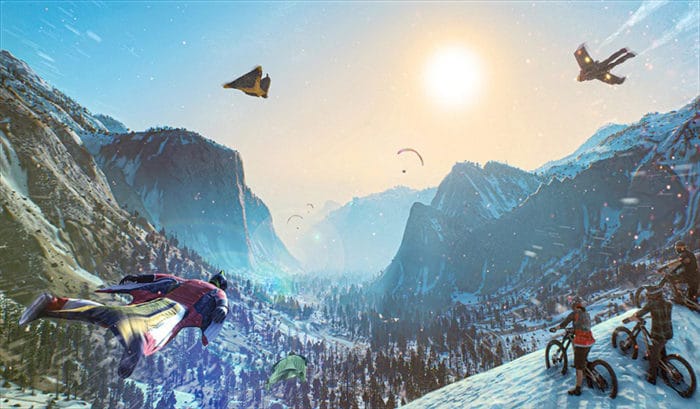 If you want to take a break from the sport progression events, or just want to focus on increasing skill in your favorite sport, Riders Republic offers you a near endless menu of diversions against or with real human players, almost all of it earning you some sort of points reward that can be used to buy cosmetic items. Unsurprisingly, you can buy outfits in the cash shop, too, but at least right now, there are no pay-to-win shortcuts. If nothing else, the framework of Riders Republic is brilliantly constructed and suggests that additional sports could easily be plugged into the template. Upcoming seasons and DLC promise things like jet-powered skis and actual sports like BMX, complete with all new tracks and competitions.

Your home base of Riders Ridge is naturally where the item shops live, and is the gateway to regularly scheduled mass races with over 60 competitors, chaotic and incredibly engaging events that cross several sports. You can also compete in 6v6, team-focused trick contests and a dizzying array of free ride races all over the map. You can traverse the map via snowmobile or glider in addition to fast travel points, and as with every Ubisoft open world game, the environment is dense with collectibles. It’s also dense with other players, too, both human and ghost AI, all jetting, biking, skiing and gliding their way through America’s great national parks. It’s like the world’s biggest simultaneous vacation party ever.

It’s a world which, impressively, spans thousands of rendered miles of wilderness without a loading screen, and although on the PS5 there was a fair amount of texture pop in, it’s hard not to be awed and a little inspired by the varied landscapes. While the ragdoll physics generate some pretty hilarious, blood-free crashes, the meticulous mocap animations for each sport are spot on. The audio design of Riders Republic is equally impressive, in particular the sound of the gear in action — the mechanical clack and clatter of the bikes, the crunch of skis on snow — and happily the licensed music soundtrack isn’t entirely stuck in the action sports/rock/rap genres, which is not to say I loved it. During the game, tracks are paired with specific events you’ll probably need to repeat, so there’s a good chance you’ll be muting them at some point.

An Extra Helping of Steeze, Brah

Everything so far, you’ll notice, has been pretty good news but there’s one or two things about Riders Republic that sour the experience quite a bit, at least for me. Let’s start with the limited character creator, which is very basic and only allows you to fashion avatars that are young and fit looking. Granted, this is a silly and superficial complaint from an old dude, but it points to the game’s obvious aversion to anything that doesn’t vibe with its frankly ridiculous fantasy of extreme sports belonging to a particular demographic. Coupled with Riders Republic’s exaggerated and weirdly out of touch version of action sports culture and slang, and I can’t help but feel like this incredible world is inhabited by thousands of self-entitled, brain dead, flannel wearing bros and broettes that I would pay money to not hang out with in real life. And speaking of real life, I live in an action sports hotspot and know many accomplished parasailers, mountain bikers and snowboarders, none of which would recognize their culture in this game.

Another minor gripe is Riders Republic’s rewind system, which allows you to replay sections of a race that you screwed up. Unlike most versions of this system in auto race games, the rest of the competitors just keep going, so rewinding — which is glitchy and imprecise — almost invariably puts you at a disadvantage, making a restart often the better option. 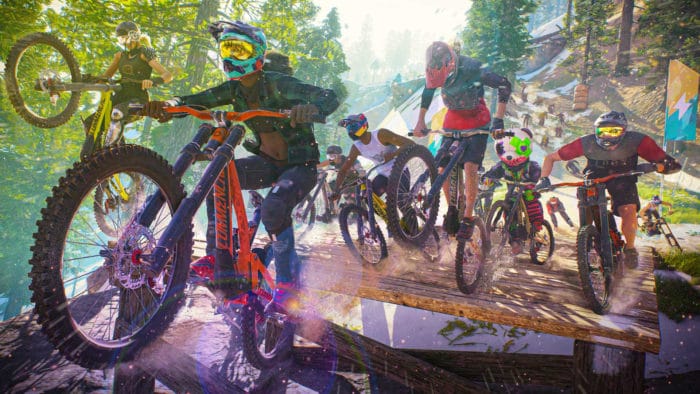 If you can ignore the game’s obnoxious attitude and in your face corporate sponsorship, you’re richly rewarded with accessible, consistently engaging representations of biking, snow sports, and wing suiting, coupled with a massive and literally awesome environment in which to compete or explore. Those that are into riding the leaderboards–or just playing with their friends–will have plenty of opportunities to fuel their addiction, but I’m guessing that just about everyone can find joy here in just goofing around in this expansive playground, at least for a while. Whether or not Riders Republic sticks the landing and stays in the playlist of many gamers beyond launch probably depends on a steady stream of new sports to try, and if an actual, thriving community pledges allegiance to the Republic’s competitive modes.

***PS5 code provided by the developers for review***

The post Riders Republic Review – One Nation, Under Fun appeared first on COGconnected.