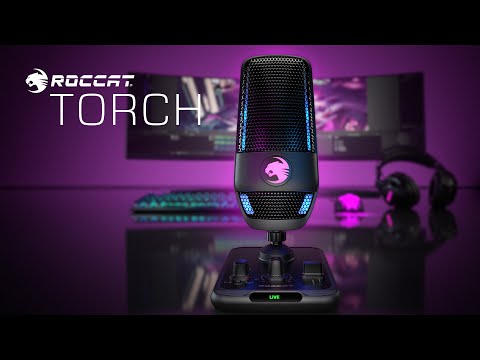 The Streamer’s Torch in the Night

In the interest of full transparency, I do not know a whole lot about audio. It can be a bit of an intimidating subject with its megahertz and other varying levels of hertz. But in the modern-day, a microphone has become an essential part of the home workspace and not everyone wants to put a whole lot of research or money into buying one. Enter the budget microphone – where value and quality do the best they can with their arranged marriage.

The gaming space is no stranger to budget microphones as streamers just starting out have been using the most cost-effective route into the scene as possible. In fact, the first microphone I used for recording my let’s play channel was an Xbox Live headset microphone jammed into a beer can. That’s a real thing that happened before my cousin gave me his old Blue Yeti Snowball. The market has seen an explosion of budget-friendly microphones over the past several years from across the industry, and this past August, German manufacturer Roccat decided to toss its efforts into the fray.

The results are a pleasantly solid microphone with a ton of style to boot. RGB lighting has become a fixture in streaming and gaming setups over the past few years, and the Roccat Torch’s design capitalizes on that without being obnoxious. Using Roccat’s synchronous AIMO smart lighting, the Torch sports slick bars of light on either side of the microphone, and the brand logo in the center of it lights up as well. The light bars will also adjust to how high you’ve set the gain on the mixer pad, which is a nice little detail.

Speaking of which, the mixer does look a little clunky at first but also adds a bit of a premium feel that makes me think I know what I’m doing when I touch it. In addition to the gain slider, there’s a dial in the center you can use to adjust the volume of your computer and another on the left-hand side that lets you choose what pick-up pattern you’d like to use. It comes with the ever-standard Cardioid for podcasts and streaming, as well as Stereo for musicians and ASMR fans (although if you’re super into that kind of thing, you should probably have a dedicated, specialized microphone for it).

But one thing that makes the Torch unique is the exclusive Whisper pattern that amplifies quieter audio for those who like to stream late at night. I found its efficiency to vary and never really nailed the right volume I should be speaking at to make sure it picked up my full sentences but sure did enjoy using it to do the entire “Rabbit Season/Duck Season” bit from Looney Tunes to try and figure it out. Even if it’s not perfect, the option alone is super handy and will likely be used by tons of people who pick it up.

Another one of the Torch’s exclusive features (and my personal favorite) is the contactless quick-mute. Simply wave your hand over the top of the mic like a Jedi to mute it, and again to go live. It feels way more fun than muting anything ever should, and I’m curious to see if Roccat uses this tech in any of their other gaming accessories moving forward. There’s also a little slider on the back of the mixer that allows you to adjust the feature’s detection distance. In addition to all the shiny bells and whistles, the Torch doesn’t require any additional software or drivers to do what you need it to right out of the box. There is the Roccat Neon program that simply allows you to either enable or disable the AIMO lighting but it’s enabled right out of the box, and if you’re going to disable it, why even bother? Still, it would have been nice to have some extra features like audio adjustments or filters available. That being said, it may be worth mentioning for any Turtle Beach owners that the Torch is compatible with AudioHub.

I genuinely feel confident in recommending Roccat’s Torch microphone, especially for starting streamers looking for a nice RGB compliment to their setup and the nocturnal. Though the Whisper option might need some tweaking through future updates, the Cardioid option that will be used far more often sounds great to my uneducated ears. The simplicity of the setup, exclusive features, audio quality, and sleek design make it worth the $99.99 price tag. Said cost is made even more affordable in ShopPay’s partnership with Affirm to offer it for interest-free bi-weekly payments of $24.99 directly through Roccat’s website.