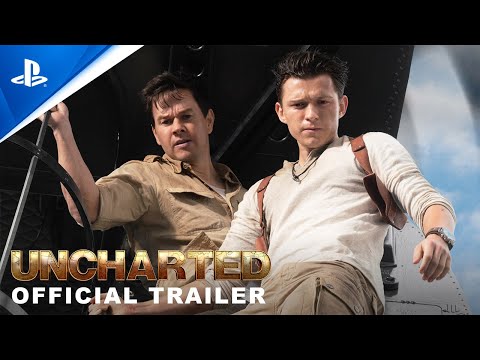 The Uncharted movie will be out in cinemas on 18th February 2022, and Sony has just dropped the first trailer for their theatrical adaptation of the hit video game series. Check it out:

The Uncharted movie stars Tom Holland as Nathan Drake, backed up by long-time adventuring partner Sully, who’s played by Mark Wahlberg. The film’s story isn’t an exact match to any of the video game tales, but according to notorious spoiler and leak machine Tom Holland, it takes the most inspiration from Uncharted 4, while being placed as a prequel or origin story of sorts.

That said, video game fans will quickly spot where some of the imagery and set piece action moments come from. You’ve definitely got the treasure haul from Uncharted 4 (and mention of Drake’s brother), and there’s the airplane sequence from Uncharted 3. That takes place above the ocean though, instead of above a desert as in the original game.

The February 18th debut in theatres is yet another delay for the film’s release, albeit a much more minor one this time around. Originally announced for a 16th July 2021 release, the film has been impacted by the pandemic restrictions, just like all Hollywood productions of the last few years. Sony announced that it would be pushed back to February 11th 2022, but what’s another week, eh? Mark 18th February in your calendars, if you want to go see it.

The Uncharted movie has been in development for so long that Mark Wahlberg has gone from originally being considered to play Nathan Drake, and now he is Victor Sullivan. The cast also includes Hollywood icon Antonio Banderas though it is unknown what his role will be, and Sophia Ali from Grey’s Anatomy, and Tati Gabrielle from The Chilling Adventures of Sabrina and The 100 will be part of the cast.

So… what do you think? Is it Uncharted enough for you?