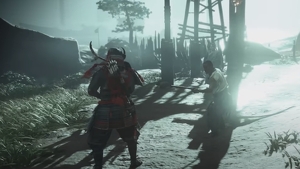 Recently, I finally had an opportunity to play Sucker Punch’s samurai epic Ghost of Tsushima, and its story of the Mongol invasion of Japan made me think about the way games treat revenge. At the heart of it, waging war is taking revenge, a form of payback for an injustice committed to you. By challenging the concept of bushido, the idea there is an honorable way to fight war, Ghost of Tsushima basically affirms that in order to get even with someone, you sometimes have to fight dirty, something that’s intrinsically much closer to our actual idea of revenge. Revenge is when the gloves come off. Paradoxically however, while the game takes a lot of effort in showing how its hero Jin takes no pleasure in sneaking around and using underhanded methods, they all feel very good to play.

Revenge is a popular tool in games, simply because so many of them rely on combat as their main mechanic. Many ways in which combat is integrated can feel slightly disconnected from what’s going on – think of JRPGs, where the fauna and flora out for your hide is just an unexplained fact of the world. Violence with the motive of revenge is much more goal-oriented, and it can feel as if we’re in the right. The player who identifies with a protagonist wants to see their goals fulfilled, after all. In his book “Into the Woods – How Stories Work And Why We Tell Them”, John Yorke explains that each story needs inciting moments, and revenge is an example of one such moment: a character happily lives their life until they become the victim of an injustice, so they set out to correct it by showing their new foe what’s what.

Revenge gives us a clear motive, an antagonist and, in the case of games, a justification for violence, and it works surprisingly well mainly because we as humans can sympathise with the hankering for revenge. We may not dream of taking an axe to someone, but who hasn’t dreamed of getting back at someone in some way? In games, revenge is always portrayed as a process that hardens a previously happy and satisfied person, both in body and mind. It’s very often a male-coded process, too – a male protagonist losing the elements in his life that softened him, that tethered him to a normal social life, like family or a spouse. Examples for that include Max Payne and The Darkness, or Red Dead Redemption. Breaking a bond of loyalty between brothers, like in Mafia 3, Red Dead Redemption 2 and Modern Warfare 2 and 3 is also a common motive.