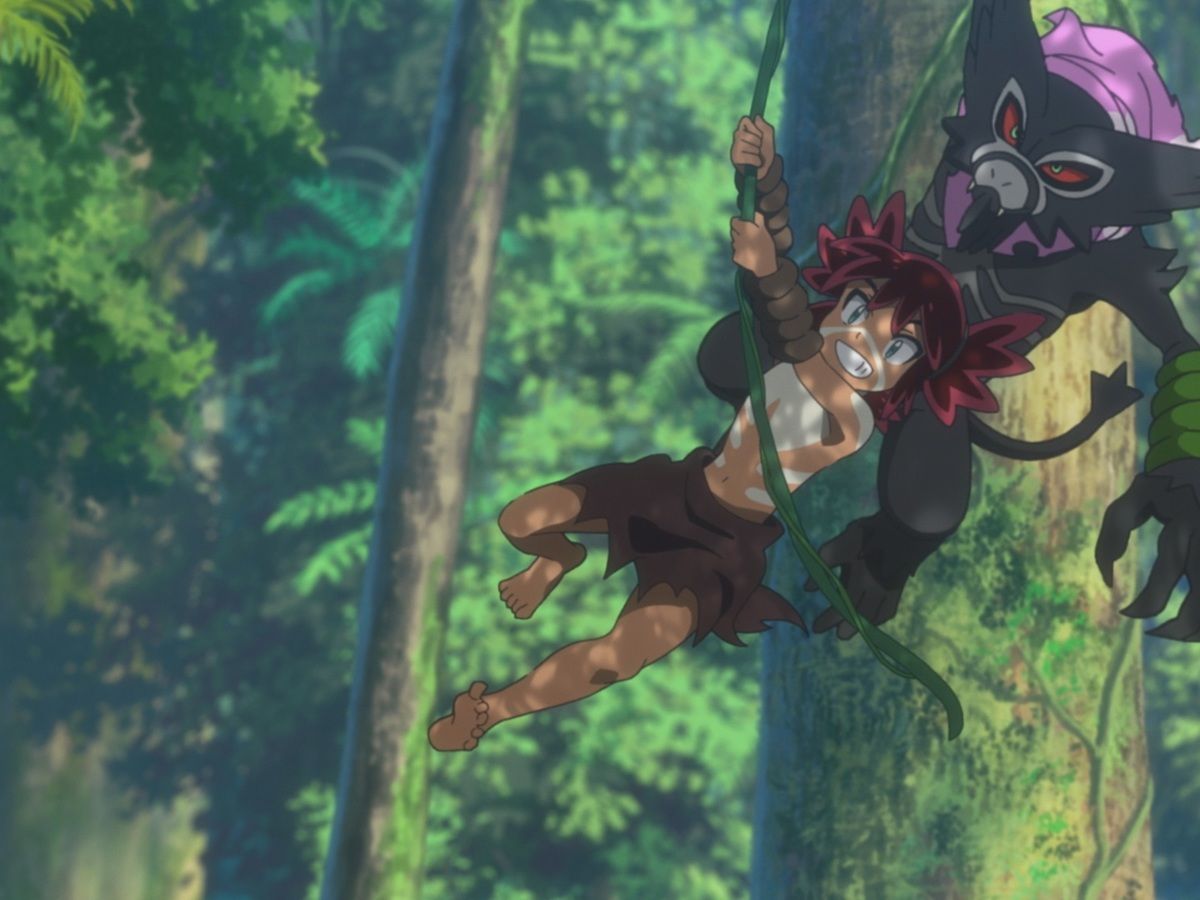 I watch a lot of Pokemon movies, and Secrets of the Jungle might be the best one in ten years. My mission to rewatch all of the Pokemon movies is still ongoing, but the newest Netflix original is already one of my favorites. Its characters are compelling, its story is rock solid, and it has one of the most evil villains Pokemon has ever seen. It manages to do the Tarzan Boy trope without falling too much into the white savior trap, and it adds so much to the ever-expanding lore of the Pokemon universe. Whenever a story makes me question the nature of Pokemon on a metaphysical level I consider it a win, and Secrets of the Jungle does some pretty mind-blowing stuff. For example, did you know that people can become Pokemon now?

Secrets of the Jungle begins just like Tarzan or The Jungle Book. Somewhere in the Okoya Forest, a Zarude, the mythical monkey Pokemon introduced in Sword & Shield, finds an abandoned human baby. Its tribe forbids humans from entering their sacred land, so the Zarude excommunicates himself to live a life of solitude, raising the baby as his son.

Koko grows up believing he is a Zarude, but finds himself constantly at odds with his human nature. Zarude are isolationists, but Koko prefers to live among the other Pokemon. He doesn’t understand why he can’t produce vines from his arms like his Darude father, Dada, and he begins to doubt that he’s even a Zarude at all.

Related: What’s The Deal With Ash’s Dad In The New Pokemon Movie?

Koko is swinging on a vine one day after an argument with Dada when he accidentally runs into a metal pipe and knocks himself out. Ash rescues him and brings him to a hospital in the nearby Milyfa Town where Koko is exposed to humans for the first time. This throws Koko into a crisis as he comes to terms with the fact that he is a person and not a Pokemon.

Koko confronts Dada, who explains to him how he found him abandoned as a baby. Ash and Koko set out to find Koko’s biological parents, but it turns out they were murdered by a scientist named Dr. Zed who, upon learning Koko survived, intends to use the boy to find the home of the Zarude – a magical source of energy called the Great Tree.

Ash and Koko team up with the Zarude tribe and defeat Dr. Zed, earning the respect of the Zarude and convincing them to no longer isolate themselves. The Zarude elder tells Koko that he is both human and Zarude, which I thought we were meant to understand in a metaphorical way.

However, during the battle with Dr. Zed, Dada is gravely injured. Koko rushes to his aid and attempts to perform a move that he saw his father do once before: a grass-type move called Jungle Healing, the signature move of Zarude. Miraculously, Koko is successful and heals Dada, proving that he is, somehow, an actual Pokemon.

This isn’t technically the first time a person has become a Pokemon.The Ghost/Grass Pokemon Phantump is a spirit possessing a tree stump, created when a child gets lost in the woods and dies. Yamask is also a ghost Pokemon that holds the mask of the face it had when it was a human. Koko is something very different though. Koko was born a human child but became a Pokemon, at least in part, through his upbringing.

It’s a revelation that raises a lot of questions. Koko is able to speak both Pokemon and human language, so does that mean Meowth, who can also speak human language, is part human? Koko’s existence warrants further research. Would it be possible to raise children with different Pokemon to give them Pokemon abilities, or is this specifically a Zarude thing? Is this how Sabrina got her psychic abilities?

How much time does Ash need to spend with Pikachu before he learns how to use thunderbolt? Koko raises a lot of interesting questions about the nature of Pokemon – questions that need answers. I’ve been trying to become a Charizard my entire life, and now Secrets of the Jungle has brought me one step closer to making that dream a reality.

Next: In Pokemon 8 Ash Becomes A Jedi And Fist Fights Lucario