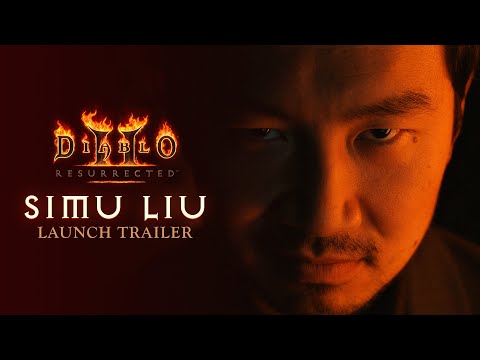 Today, kind of out of nowhere, a new trailer for Diablo II: Resurrected was released and it’s, well, really different. For starters, it’s live-action and it also features Marvel star Simu Liu, as a “sinner.”

In the trailer, Liu plays an unnamed man (possibly the player character?) seeking permission from some kind of priest to commit acts of sins against the Lord of Terror, Diablo, believing the only way to defeat darkness is to descend into darkness himself.

The trailer is pretty short and there’s not much else other than what I described, but it’s still a pretty neat little video to get players hyped up for the release in two days.

The timing of the release of this trailer is a bit unfortunate for Activision-Blizzard, however, as Liu is going through a bit of controversy this week. Some people are claiming to have dug up a Reddit account of Liu’s that purports some inflammatory takes; claims that Liu hasn’t yet firmly denied or confirmed, but has appeared to acknowledge. True or not, it’s a bit awkward all around, especially considering Activision-Blizzard is working through some issues themselves right now.

I can’t imagine the answer to whether or not Liu said messed up stuff on Reddit in the past is going to have much bearing on people’s enjoyment of Diablo II: Resurrected, though, when it launches on Sept. 23 on all major consoles and PC. So just enjoy the trailer below, or don’t, it’s up to you.

The reaction to the trailer has been mostly positive if Likes/Dislikes are anything to go off of. Although there is a higher percentage of Dislikes than you would normally find in your average promotional material.