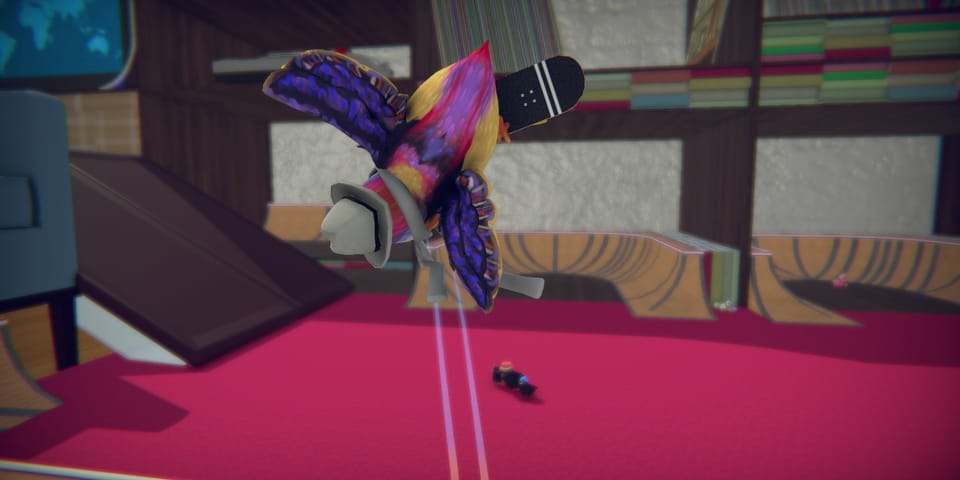 I am awful at SkateBIRD. I have gazed desperately inside myself and searched longingly for the beating heart of a tiny parrot on an even tinier skateboard, and found myself wanting… I am coming clean to my own lack of radical moves, because I don’t want to blame SkateBIRD entirely for the problems I had with it. Still, in aiming for a sweet spot between the precision and flow of a dedicated skater, and the unpredictable physics hilarity of an Octodad or the recent I Am Fish, SkateBIRD frustrates just as often as it charms.

SkateBIRD has that aforementioned charm by the bucketload. You’ll start by making your own avian acrobat, selecting from the fine, feathery selection of patterns and accessories on offer. There’s everything from beanies to skate decks, scarfs to capes, and there’s more clothing hidden around the stages, too. I imagine there’s a few players who’ll find dressing up their bird to be the game’s greatest joy, and they’re well catered for.

The soundtrack, too, is a lovely mix of lo-fi beats to eat stolen chips too. Chilled, smooth tracks mixed in with samples from various bird documentaries. There’s also a dedicated “Screm’ button, should you choose to squawk along. It even counts towards your combos.

The conversations between birds that bookend each mission are also delightful. Each stage functions as a free-roam park, letting you explore its sandbox to practise and find collectibles. Around the stage are various birds, and chatting to them lets you kick off the next mission. Each one is preceded and concluded by conversation, and progression in the bird’s quest to aid ‘Big Friend’. Personally, I found the writing to be a hoot, but I’m also the sort of person who just made that pun. I think you already know whether SkateBIRD’s humour appeals to you.

Both park and mission designs play into the…I want to say… lore? The deep SkateBIRD lore. So the first park is your Big Friend’s bedroom, which you’ll clean up by grinding around the rim of manky soup bowls and pulling manuals over carpet stains. The second is a rooftop where you’ll plan a heist to save Big Friend from their boring job – a noble pursuit. Missions involve you pulling off ever more complicated maneuvers, but they’re all given funny context as part of a surprisingly detailed story campaign.

Some janky textures and an odd depth of field effect aside, the packaging is great fun. It’s just the actual manoeuvring – the ‘Skate’ half of the ‘SkateBird’ combo – that can be endlessly fiddly. I understand the intent. Skateboarding games offer the fantasy of being impossibly skilled. SkateBird asks: what if you weren’t an agile and fearless athlete, but instead a small, puffy bird that occasionally forgets that windows exist? And it absolutely captures this. I just don’t especially enjoy it.

The camera’s tendency to get stuck on the geometry – an issue the developer is aware of and has promised to fix – is one of the culprits here. As is a finicky and inconsistent physics. Early missions do a fine job of gradually tutorialising the tricks at your disposal, and there’s even a helpful toggle in the options to adjust gamespeed. I can’t blame the game for not catering to me, I just don’t fancy battling with gummy controls and a camera that really hampers flow. I’ll likely return after a few patches. I might even check in every now and then, just to see how these well-meaning little hooligans are getting on. For now, though, it’s hard to feel too bad about putting these birds back in their cage.