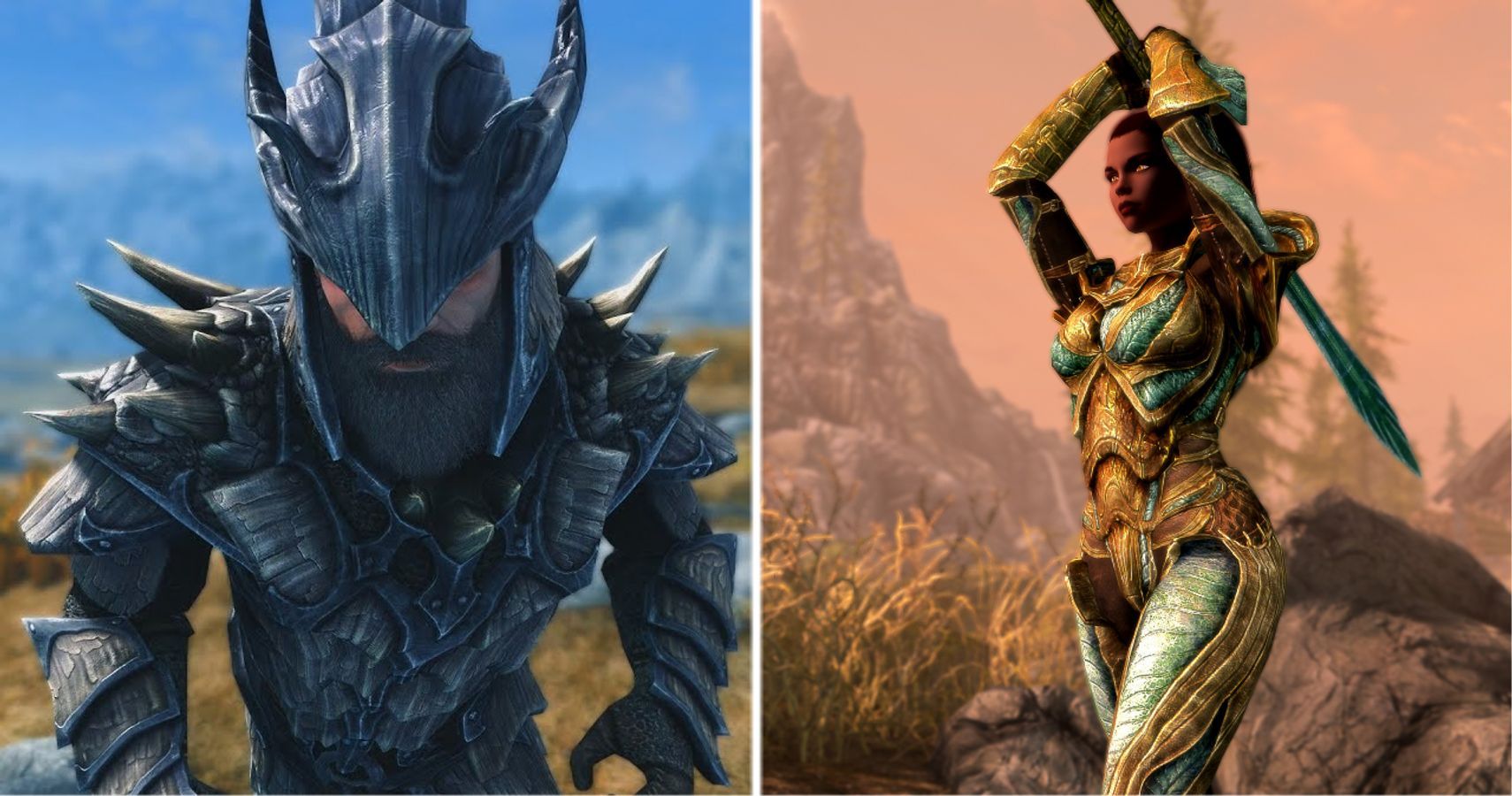 Light and quick on one's feet, light armor is the second type of armor in the world of The Elder Scrolls 5: Skyrim. While it's usually overlooked by most players as not being good enough due to its significantly lower armor rating, light armor does have its own perks.

Light armor in Skyrim is particularly good for players who want to remain agile and prefer playing sneaky or quick characters from range. With the right perks unlocked from the skill tree, wearing a full set of light armor also grants some incredible bonuses. For those wondering which full set to go for, here are the best light armor in Skyrim.

RELATED: Best Bethesda Games (And The Worst), According To Metacritic

Updated on August 11th, 2021 by Anastasia Maillot: Character builds that favor light armor have become extremely popular in Skyrim. From the famous stealth archer to the edgy assassin, being sneaky and dealing incredible amounts of damage is one way to defeat Alduin.

Fur armor, in terms of immersion, is probably the best-looking light armor in Skyrim. It definitely has Skyrim written all over it, but sadly it's among the weakest armors in the game. With upgrades, a set of fur armor can be improved to a degree.

The good thing about fur armor is that it's available easily and at the beginning of the game, though it can't be crafted and it's usually not sold by any merchants in Skyrim.

For something truly unique, but still well within the theme of Skyrim's wilds, there's Forsworn armor. It's another armor set that's fairly easy to find even early on in the game, although it's generally not advised to challenge some of the Forsworn camps at lower levels due to Briarhearts.

RELATED: Craziest Quests In Skyrim (& Where To Find Them)

A full Forsworn armor set can be looted off of most Forsworn members at any camp located in the Reach. Its poor armor rating puts it on the lower end of a light armor tier list.

Players who have the Dragonborn DLC installed might recognize this as the Chitin armor. However, the darker coloring on the face actually reveals it to be Morag Tong assassin attire, which can be looted off an assassin in Solstheim or found in Ashfallow Citadel.

It can't be crafted, but being fairly easy to find, it's one of the best light armor sets in Skyrim to add to any assassin character's build. The full set will grant the player an armor rating of 53.

One of the most basic and earliest light armor sets in Skyrim available, hide armor in Skyrim is extremely easy to find both in loot and at shops. It's also available for anyone to craft regardless of Smithing skill level, and requires leather, as well as leather strips.

When worn with a shield, the full set will give the player an armor rating of 55, just a bit better than the Morag Tong assassin's armor, and is available in the base game.

This skin-tight armor set is granted to those who join the ranks of the Dark Brotherhood. It's usually enchanted with powerful boosts to abilities used by assassins and thieves alike. After the faction is joined, this set will appear pretty often and other variations become available as well.

In fact, some alternate versions estimate its base armor rating to be around 72, but the basic version is still 58. For assassins, this is the best light armor set in Skyrim.

This among the most unique light armor sets in Skyrim. It can't be crafted, but it can eventually be upgraded with some moonstone ore. The Ancient Falmer Armor has a cool appearance that almost seems to combine an Ebony armor set and an Elven armor set.

To get this light armor set, the Dawnguard DLC must be installed and Arch-Curate Vyrthur has to be defeated during the quest Touching the Sky. Loot his corpse to find this lovely unique set, which totals to a 60 armor rating.

The Dawnguard DLC introduces players to a new faction that fights the rise of the Volkihar vampires. New recruits can choose between a heavy or a light armor set, the light one being a slightly modified version of the heavy one. It's easily available and simple to find, and can even be repurchased although it can't be crafted.

The full set of the light armor will provide the player with an armor rating of 61, which makes it an average-tier light armor set in Skyrim.

Another base game light armor, scaled armor is easy to find in loot or even on the corpses of most bandits. However, if finding it proves difficult, the player can also craft one provided their Smithing is at level 50 and they have the Advanced Armors perk unlocked.

The recipe calls for Corundum ingot, leather, leather strips and steel ingot. Scaled armor, when wearing a full set, will grant the player with an armor rating of roughly 64.

There are some mild perks to joining the Imperial Legion, one of which is getting one's hands on the Imperial Light Armor set. This armor can be acquired pretty much instantly in the game as the Dragonborn escapes Helgen. It can also be crafted if the Steel Smithing perk is unlocked.

The full set of Imperial Light Armor along with a shield will give its wearer an armor rating of 68.

The Thieves Guild is one of the best factions to join if you're looking to grab two sets of unique light armors for the price of one quest line. Not only will you eventually have the Guild Master's armor, but you'll also get one of the coolest-looking light armor sets in the entire game: the Nightingale set.

With the Nightingale armor out of the way, the slightly less cool-looking but still immensely good Guild Master's armor set is definitely worth the grind and is actually much better than the Nightingale set when it comes to armor rating only. It's also easier to upgrade with just leather.

To get your hands on this, you'll need to not only finish the main quest for the Thieves Guild but also restore the guild to its former glory by running a few jobs for Delvin and Vex. Tonilia will then gift you with this armor set, which is easily among the best light armor sets in Skyrim with a rating of 76.

Not to be confused with the Morag Tong armor, the Chitin armor has a similar appearance with a more reddish coloring. Included in the Dragonborn DLC, this armor can be found in different locations around Solstheim, but it can also be crafted if the Elven Smithing perk is unlocked and the player has Smithing level 30.+

Its crafting recipe calls for Netch leather, Chitin plate and iron ingot. A full set of it with a shield included will provide 85 armor rating, which is pretty close to low-end heavy armor ratings. As such, it's one of the best light armor sets in Skyrim.

Glass might sound like a weak crafting ingredient, but in Skyrim, glass armor is the third-best light armor available. It's fairly common to find in loot around level 36 or even lower. Most stores will also have pieces of it in their inventories. On top of that, it can be crafted if the player has level 70 Smithing and the Glass Smithing perk.

RELATED: Skyrim: The Best Areas (& Areas That Are Just Terrible)

The recipe requires refined moonstone, refined malachite, leather and leather strips. A complete set with a shield will bump the player's armor from over 100, to 103.

Stalhrim is a new ore introduced in the Dragonborn DLC, and allows for the creation of both a new heavy and light armor set. Various NPCs in Solstheim will sell the armor, but it will also be included in loot around level 35. Level 80 Smithing and the Ebony Smithing perk are a must to craft one from scratch.

The recipe calls for Stalhrim, leather strips, steel ingots and quicksilver ingots. With a shield, the player can expect to have an armor rating of 108 when wearing the full set. With such a big rating, it's officially the second best light armor set in Skyrim.

Finally, the best light armor of the game is undoubtedly the Dragonscale armor. If the Daedric kind had a light armor, it would probably be something better than this one, but unfortunately light armor wearers will have to make due. This armor can rarely be found in loot, which is why crafting it is usually the better option.

At Smithing level 100 and with the Dragon Armor perk unlocked, the player will be able to craft a full set using Dragon Scale. With a shield included, the set rates at around 111, making it decent even for heavy armor standards and as such, the ultimate and best light armor set in Skyrim.