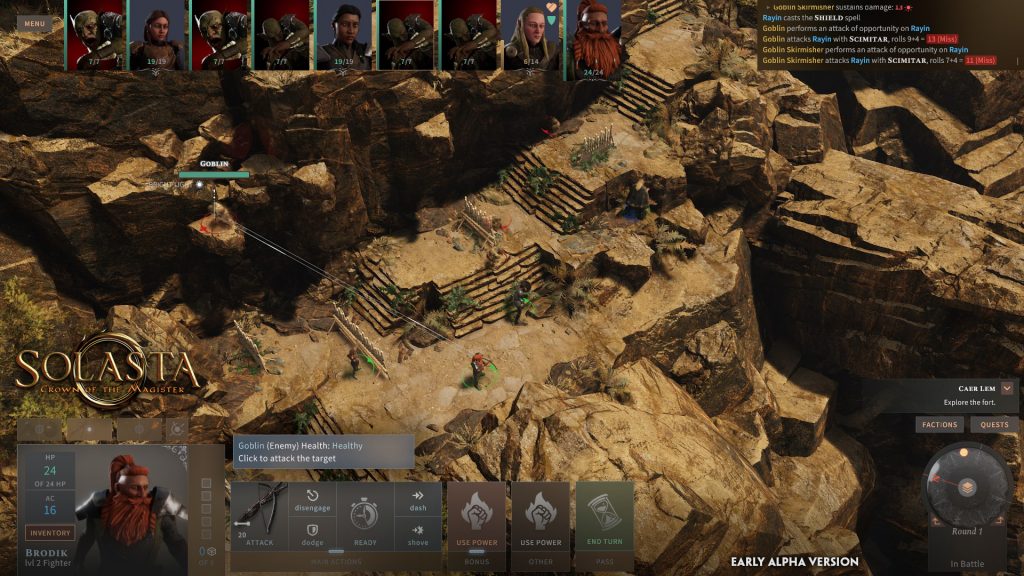 Tactical Adventures have announced the full release date for their Early Access tactical party-based RPG, Solasta: Crown of the Magister.

As previously reported, Solasta: Crown of the Magister is a tactical, party-based RPG inspired by classics from the genre, and uses the SRD 5.1 ruleset. What sets Solasta apart from other CRPGs is the emphasis on verticality, with multi-tiered levels that involve fighting enemies above and below your party as you descend deeper and deeper into forgotten dungeons and caverns.

The game entered Early Access in October 2020, and has been steadily updated since. The game’s campaign will be around 40 hours in length, with a level cap of 10. While older save files will be compatible, the developers recommend creating a new file to experience the latest features.

Solasta: Crown of the Magister is in Early Access for Windows PC (via GOG, and Steam), and will get a full release on May 27th.

Bring the authentic Tabletop gaming experience to your PC!
Roll for initiative, take attacks of opportunity, manage player location and the verticality of the battle field. Set yourself up for the finishing strike and possibly roll a natural 20 at that key moment of battle.​

In Solasta, you take control of four heroes, each with unique skills that complement one another. Every hero expresses themselves in the adventure, making each action and dialog choice a dynamic part to the story. Players will create their heroes just as they would in a pen-and-paper game by choosing their race, class, personality and rolling for their stats.​

You make the choices, dice decide your destiny.

An Epic Team Adventure
Discover the shattered world of Solasta: explore ruins and dungeons for legendary treasures, learn the truth of an age-old cataclysm – and stop it from happening again.

Create your very own party of adventurers with our Character Creation Tool in the classic tabletop RPG tradition. Breathe life into your heroes, and see their personalities reflected in their dialogue. Tailor your squad to your preferred strategy and maximize your party’s abilities. The choice is yours.

Discover a Mysterious & Dynamic World
Delve into long forgotten dungeons to unearth ancient artifacts, but stay watchful of light and darkness: many dangers hide in the dark, but a light can attract monsters. Some enemies have darkvision, some may flee from your torch… Successful adventurers will learn to use it to their advantage.

Fight monsters in squad-level, turn-based, tactical combat. Solasta’s dynamic environment offers some interesting tactical options. Bridges can collapse, leaving enemies stranded and vulnerable. Walls and columns can be pushed over – on top of your foes, if you do it right. The world is your playground.

Prepare to Think in Three Dimensions
The dungeons in Solasta are more than flat game-boards. Climb, jump, or fly around obstacles. Evade or surprise foes from above or below. Push them into chasms or drop things on their heads. Position yourself on high grounds to start the fight with an advantage.

Size also matters. Escape through narrow passages where bigger enemies won’t fit and crawl through tunnels to find secret areas. Take advantage of the environment to find cover suited to your own size. Watch out, though – the monsters are also thinking vertically.

Dungeon Maker
In Solasta, the adventure does not stop after the campaign is over. Unleash your creativity and craft your own dungeons to play and share with friends with the snap of a finger using the in-game Dungeon Maker! From the room layout, monster composition and treasure the party will find – down to the decoration and lighting of each room or the music track playing – everything is decided by you.

Note that the Dungeon Maker is a work in progress and will keep being improved as time goes by, so look forward to more Dungeon Maker features in the future!