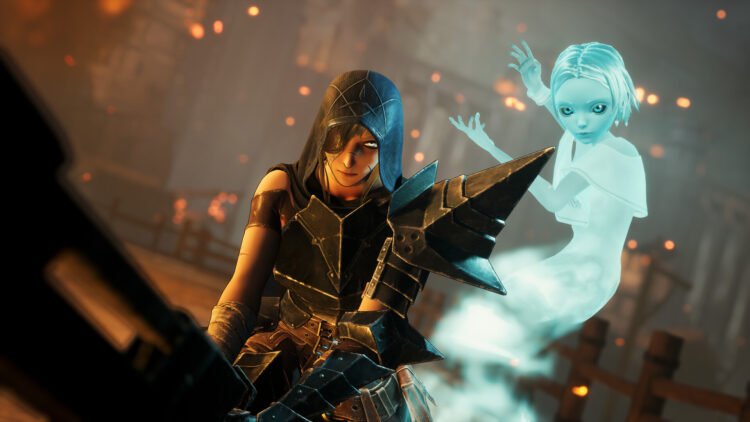 Soulstice is like Devil May Cry, but with a busted camera

Demonic, world-ending invasions are a hell of a thing. Thankfully, there’s usually a god, devil hunter, umbra witch, etc., around when they go down. However, those need to make way for Briar and Lute the Chimera, who are attempting save the world, even if it hates them, in Soulstice by Reply Games Studio.

Let’s take it from the top

In Soulstice, you play as Briar, a Chimera, and Knight of the Ashen Blade, just as she docks her boat in Ilden. Ilden is in a state of decay, having been abandoned by its citizens following a demonic invasion. The reason why Briar, along with the spirit of her sister Lute, was sent to Ilden isn’t apparent but the two decide to dig deeper into the mystery surrounding the once proud city as they search for other Chimera who were sent before them.

The story is engaging enough it’ll keep you moving forward, but the dialogue does feel generic. Briar’s tough, while Lute is meek, and some of the people you’ll meet just kind of treat them like crap, given their status as a Chimera. It’s one of those tales that’s just as old as time, but it really doesn’t make it any less engaging. Briar and Lute have a cute relationship as well. The two will often engage in little conversations about their predicament or simply offer words of encouragement to each other. There’s this genuine feeling of love between the two, which in my opinion, that relationship is actually elevated by the gameplay.

One thing I liked was that Lute has the ability to uncover “echoes” that open up a bit of lore leading up to the events of the game. With everything being burned to the ground and all human life abandoning the city, it’s a nice way to expand the world. Especially considering Soulstice starts off at the literal ending of the game, with Briar fighting tooth and nail against demonic forces.

Combat with a lot of Soulstice

Soulstice operates in ways similar to the Devil May Cry and Bayonetta games. You make your way through linear missions with the occasional stroll off the beaten path (for challenge portals or important items) and fighting waves of enemies. After each encounter, which is signaled by enemies joining the fight with portals, players get graded for their performance. The better you perform, the higher the grade you earn.

As you progress, you’ll earn materials needed for upgrading Briar and Lute, as well as unlock new weapons. Each weapon Briar gains access to has its own attacks that can be unlocked and such, earning players access to new combos. Lute has multiple extensive skill trees, and unlocking each skill makes her an even tougher shield. Players can increase her parrying window, and radius of her fields, or even unlock synergy attacks that work in tandem with Briar’s abilities.

Briar will also eventually unlock a transformation known as her “Rapture State.” It’s very similar to Dante’s “Devil Trigger” in that it will give Briar a huge boost to her combat abilities. In this mode, you can’t use any items, but it allows Briar to dish out a lot of punishment to all enemies in her vicinity. Even those that require Lute’s Evocation field aren’t safe from the rapture.

It’s what I love most about Soulstice. There’s this symbiotic relationship Briar and Lute have together in terms of gameplay. Briar is the muscle, the arm that swings the blade, while Lute acts as the shield, protecting her sister from all sorts of attacks. It quickly becomes clear that one cannot do the job without the other. Mastering Lute’s abilities are key to successfully dominating every encounter and obtaining the highest score possible.

There are some issues, but don’t let that stop you

The biggest issue with Soulstice is its camera. When you’re exploring, the camera is locked into a fixed position. When you engage the enemy in combat, it unlocks, and you’re free to move it around as you see fit. Most of the time, it works. However, it’s a huge pain to maneuver in some instances, like when you’re in smaller spaces.

Personally, I wasn’t a fan of the character designs either. Briar just looks generic as well. In the beginning of the game, she’s rocking this silly, spiky coat of armor that’s oddly revealing. None of the enemies look all that interesting either, and they share the same color palettes. There’s just a lot of black, blue, brown, and red between them, making them very uninteresting to look at.

On top of that, it makes enemies harder to see. It also doesn’t help that when you’re progressing through the game, enemy variety grows and a lot more begins to happen on screen. You’re got armored enemies, flying enemies, and ranged enemies, and these all have their indicators that pop up. It just feels chaotic when you’re trying to whittle away an enemy’s armor while also revealing spirits with Lute’s evocation field and trying to reflect thrown spears.

The City of Ilden and all of its Splendor(?)

Ilden is a dank, depressing place, consumed by fire and bathed in the blood of those unlucky enough to escape its destruction. It’s unfortunate, however, that Ilden is another part of the game that just looks ugly and generic. While it’s understandable, given its fantasy setting, you’d expect to see a lot of stonework and old-world technologies; the environments just feel like they repeat themselves too often. There were areas, especially at the beginning of the game, where I felt some of the game’s assets were just flipped around.

I played Soulstice on my PS5, and it performed wonderfully. During my play-through, I didn’t experience any performance issues or glitches. Repeating one complaint, I feel like I make far too often is that it’s another game that doesn’t really take advantage of the Dualsense. Otherwise, I’m happy that this is a short bit.

Sound design-wise, there wasn’t anything in particular that stood out for me. As far as hack-and-slash adventure games go, Soulstice does a fine job in the sound department. Stefanie Joosten, who modeled as MGSV’s Quiet, does a good job voicing Briar. She also voices Lute, though, and I think people will either love that performance or hate it. That being said, compliments to Joosten for voicing two characters with a very different range between them at once.

There isn’t a whole lot that the game does wrong. Walking away from it, my biggest complaints were the camera and bland aesthetics. Otherwise, Soulstice does a lot right. The gameplay is the driving force, and its narrative is the cherry on top.

While it doesn’t necessarily reinvent the genre’s wheel, Soulstice is an incredibly fun game that will help fill that void as you wait for God of War: Ragnarok and Bayonetta 3 to release. Soulstice’s over-the-top action with a story that’ll keep you hooked until you see it through until the credits roll, — camera issues be damned.

Review Disclosure Statement: Soulstice was provided to us by Reply Game Studio and Modus Games for review purposes. For more information on how we review video games and other media/technology, please review our Review Guideline/Scoring Policy for more info.

Soulstice isn’t looking to reinvent any wheels but it’s an incredibly fun hack-and-slash adventure game with decent storytelling. Its only downsides are its weak visuals and finicky camera.