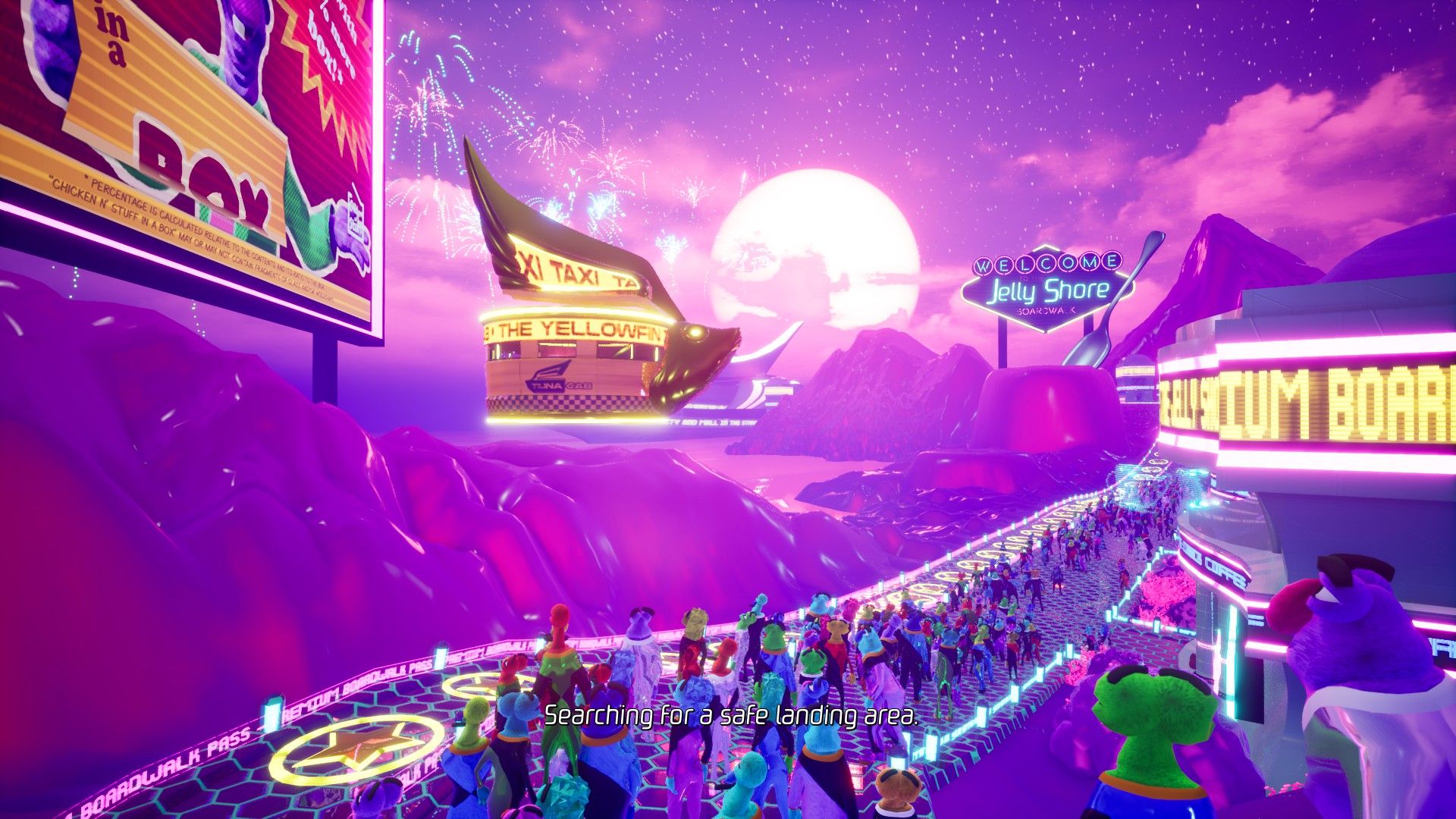 Stepping foot into Space Boat feels like your first visit to the Citadel in Mass Effect – Jelly Shore is a sprawling metropolis full of aliens that feel ripped straight from an episode of Rick and Morty. However, the subtle dim whites and familiar park settings of the Citadel have been swapped out for garish pink neon and a vaporwave sky. It’s not quite as pleasant to look at, but it’s certainly distinct.

That’s the game summed up – Mass Effect but zanier. I’m not just using a flagship sci-fi blockbuster as a cheap comparison either – it was made by an ex-Mass Effect developer who also has experience with Dead Space and Thief. The talent behind Space Boat is stacked. This shines through in the way it handles. It’s uniquely Mass Effect with its floaty camera and stiff characters, serving almost as a Bizzaro mod that swaps out the militaristic gun-ho politics with modern internet culture. It’s charming in a nostalgic sort of way but also feels glaringly 2016.

RELATED: More Of Mass Effect Should Have Been On Thessia

Chiefly, this tone comes across in the characters. They’re partly a critique of the industry and partly an in-joke for those of us who spend too much time online. One of the first people you’ll meet is Pre-Order Earl, a blubbering mess of goo slumped on a chair in a waiting room with a stereotypical nerd voice. Everything he earned for pre-ordering is superficial like some trading cards and a plaque, leaving him in the same ‘boat’ as everyone else. It’s a dig at ultimate editions and pre-order bonuses of triple-A gaming, but it’s very on the nose. Yet, it feels fitting coming from a Mass Effect 3 developer, with Earl a clear nod to Javik – the Prothean squadmate key to understanding ME3’s politics, locked behind a pre-order bonus at launch.

Then there’s K4-R3N, the robot receptionist who you don’t speak to – you instead “bother” her. You can ask to speak to her manager to which she’ll reply, “I am the manager.” The lack of subtlety is endearing in that, “How do you do, fellow kids?” kinda way, but it’s also jarring. It results in very few characters feeling like characters – they aren’t interesting or dynamic in their own ways. Instead, they’re built on the backs of meme culture caricatures with little depth building up their personas. Earl’s whole shtick is he ate some trading cards and is hungry for more. So, while it is endearing at first glance, it’s a detriment for a game where you play as a detective as many of the people you meet just aren’t that interesting.

Nonetheless, much of the aesthetic is worth praising. You’re a cat in a mech suit, blending in with society, and you can use that mech suit to pet a jelly dog. It’s cute, the mouse cursor is a paw, and it’s fun to walk around in. More importantly, it’s incredibly intuitive. If you’ve played any BioWare game, you’ll feel at home – even if that home has now been turned upside down and filled with Christmas lights. There’s an odd, loose sense of familiarity that helps to make it easy to get into but it’s also helpful without being handholding. You’re given some direction, quests in the top right corner, and told how to use your menus. With the fundamentals laid out, you’re left to your own devices where you have to talk to strangers and work out how to progress. The tutorial phase is very brief, which is refreshing when so many others seem to drag on.

As far as demos go, Space Boat is charming, but it needs work. In a short burst, it’s sweet, but if the whole game were to be a series of references, in-jokes, and memes, the appeal would quickly wane. There’s not a lot to dig your teeth into and the lack of subtly spliced with that internet culture can often make many of the industry critiques feel hollow and unearned, but it’s a good jumping-off point all the same.