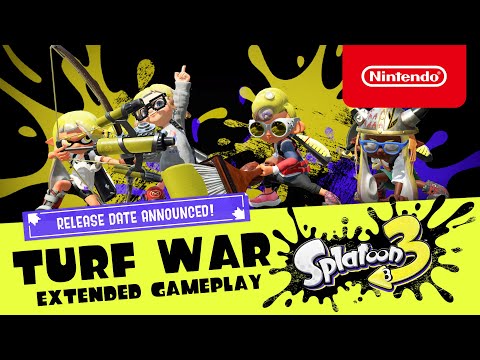 Fans suspected it, but now Nintendo has confirmed that Splatoon 3 has been delayed – but not by much.

When Nintendo dropped the surprise news that Xenoblade Chronicles 3 would release in July, two months earlier than planned, it was theorised that this schedule shift would mean something else was being delayed.

Since it only had a vague summer 2022 launch window, Splatoon 3 was the chief suspect. Turns out those suspicions were right, as Nintendo has announced that the game will release in early September instead.

Given its previous launch window meant the latest it could arrive was August, this isn’t too much of a wait and suggests that, while there have been few updates, development on Splatoon 3 has been progressing well.

Nintendo also shared a new trailer that consists of an entire, uninterrupted Turf War match – Splatoon’s main gameplay mode where teams of two compete to cover the majority of the map in their ink colour.

The core gameplay established in the first Splatoon remains the same, although fans will notice some minor changes, like how the teams enter the map, as well as the new weapons and gameplay mechanics.

For example, we see the new crab mech in action, if only briefly, as well as a new ability that lets players temporarily swing around the map like they’re Spider-Man.

Previous trailers have confirmed the returning co-op mode Salmon Run from Splatoon 2 and a new single-player story mode called Return Of The Mammalians.

While the title implies that mammals (which are mostly extinct in the world of Splatoon) have somehow returned, the story mode will once again see you fight against the Octarian army, the main antagonists of the previous two games.

To keep things ticking over in the meantime, Nintendo has announced that the (excellent) Octo Expansion for Splatoon 2 is now free if you have the Nintendo Switch Online Expansion Pack.

Although they’ve never outright stated the fact, it seems the idea is that all future DLC for Switch games will be free via the Expansion Pack, although this is the first time they’ve applied that logic to a pre-existing expansion.