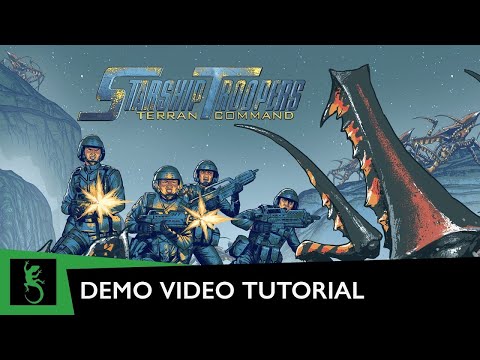 “The only good bug is a dead bug!” While those are wise words to live by, exterminating bugs can still prove to be an entertaining way to pass the time. Case in point: Belgian studio The Aristocrats is working on an RTS adaptation of Paul Verhoeven’s beloved 1997 action-comedy series for PC dubbed Starship Troopers: Terran Command.

The good news? A new demo is now available for the upcoming game which you can download from Steam here.

Coinciding with the news is a brand new video spotlighting a scenario from said gameplay demo. Go ahead and check it out down below:

From the looks of things, Starship Troopers: Terran Command appears to be a promising RTS experience that implements the military sci-fi licence in interesting and clever ways.

Strategic turn-based XCOM-esque gameplay is combined with the dystopian action tone of Starship Troopers, and it seems – from this demo, at least – like a marriage made in bug-filled heaven, right?

Starship Troopers: Terran Command is coming to PC via Steam in “the next few months.” For more information, here’s a general overview courtesy of the game’s official press release:

On October 1st at 5 pm UTC the Steam Next Festival will commence. It is a six-day long event on Steam in which many upcoming games will make demos available to play for free. We have great news: Starship Troopers – Terran Command will be doing its part in the Steam Next Festival, and everyone will be able to download and play the demo.

The demo will contain two scenarios, including “Peace of Mine.” This is an early scenario that already features most of the game’s key mechanics: players will deploy the Mobile Infantry to defend a central outpost, which will serve as the staging point to reactivate mining facilities and clear out all bugs nests in the surrounding area. We know that you’ve been looking forward to more news about the game. From our side, we’re looking forward to hearing what you think. We can’t commit to a specific release date yet as we want to act on the feedback we will receive. We only ask you, if you’re willing, to give us your honest opinions on the missions you’re going to play, so that we can ensure that the game lives up to fans expectations. You can share your feedback on the new Starship Troopers – Terran Command Discord server, available from today, October 1st.

“Releasing a Starship Troopers – Terran Command demo at Steam Next Fest was a key decision in the development pipeline”, said David Sharrock, Executive Producer of the game. “We really want this game to deliver on the promise of a true Starship Troopers experience, and collecting feedback from the players is an important milestone of this process”.

The post Starship Troopers: Terran Command Brings The Fight to The Bugs in New Video & Demo appeared first on Twinfinite.