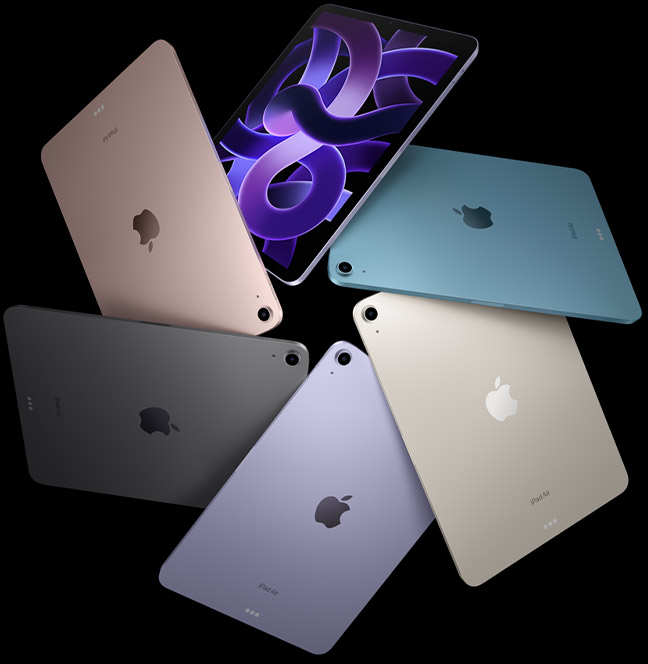 At Apple’s peak performance launch event, besides the new iPhone 13 color scheme and new iPhone SE, Apple officially unveiled its new generation iPad Air, which is also the most powerful iPad Air ever, as it is equipped with the Apple M1 chip.

The shape is still strongly Apple’s family-style, with four sides of equal width design with right-angle bezel has a strong recognition, and provides a variety of color options such as Space Grey, Pink, Purple, Blue, and Starlight.

The new iPad Air is equipped with a 10.9-inch Liquid retina display with a resolution of 2360×1640, a PPI of 264, support for wide color gamut display, original color display, and other features, and a brightness of 500 nits.

The processor is equipped with Apple’s M1 chip, which has an 8-core CPU and 8-core GPU, and 8GB of memory. Compared with the A14 chip of the previous-generation iPad Air, the CPU performance is 60% higher and the GPU performance is 2 times higher.

The camera is a 12-megapixel rear camera that supports 5x digital zoom, Focus Pixels autofocus, and panoramic photo shooting, while the front-facing camera is upgraded to 12-megapixels with support for center stage and lens distortion correction.

The new iPad Air is available in Wi-Fi and 5G versions, both with Wi-Fi 6 support. The latter also supports up to 21 5G bands, two more than the 5G bands supported by the new iPhone SE.